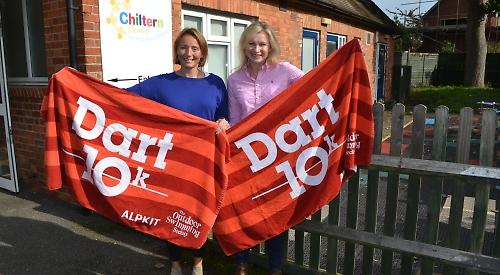 TWO women raised more than £2,000 for the Chiltern Centre for disabled children in Henley with a 10km open water swim.

Mel Hall and Penny Marshall, of Waltham St Lawrence, took on The Dart 10km on the River Dart in Devon on Saturday, September 9.

The women, who are both stay-at-home mums, trained with practice swims of up to 6km and took to the water at about 9am on the day, taking about two-and-a-half hours to complete the course.

They were among 1,600 swimmers to take on the challenge over two days, braving river temperatures of about 13 degrees centigrade and silt and debris following heavy rainfall.

Mrs Hall, 43, who has also competed in the Thames Marathon and several triathlons, said: “It was fantastic, although the river was quite dirty. We had to clear a path with our arms and when we got out our faces were filthy!

“It was quite cold but once we got going it was okay. The last few kilometres were tough, the water was fast-flowing and rough. It was really strange to start off in fresh water and then join the estuary where it became salty.”

Mrs Marshall, 45, trained for the event by taking part in the Henley Classic and Henley Mile earlier this year. She said: “I did a lot of swimming in a lake in France over the summer but open water is the scary part. Mel talked me in to the water in May for the first time in Wargrave and a group of six of us did it together.”

The women say they heard about the centre in Greys Road through their friend Liz Deacon, who is a community fund-raiser there.

Mrs Hall added: “As a parent,  I can only imagine the challenges facing those parents of disabled children and that we have somewhere local which is such a lifeline and that can help alleviate some of the daily stresses they face is fantastic.

“I was really keen to make the most of this swim and ensure some financial support for the centre came from it.”