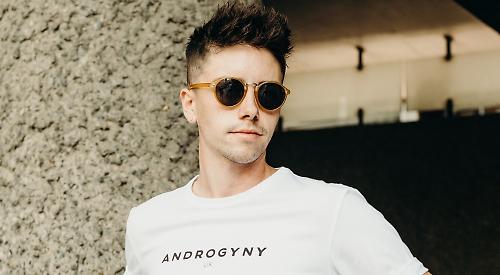 A MAN from Henley has started a brand of clothing after being inspired by his university studies.

He says classes he took during his philosophy and media degree at Newcastle University made him question the way gender is perceived and he began making designs for clothes which could be worn by anyone on the gender spectrum.

When he graduated last year he decided to pursue the business further and formed the online company.

Mr Bevan, 22, who lives with his mother Louise, head of business intelligence at Vodafone, said: “While I was at university I did a lot of gender studies and it made me think about how society sees people.

“I want people to express themselves and their identity by wearing whatever they want, without worrying about what anyone else thinks.

“It’s important because I feel like the concept of gender is changing. People don’t see it as black and white, male or female . It’s a spectrum and with you have to change the way you approach it with clothes.

“When I was in my second year at university I came up with the idea of the brand and developed it while I was studying. When I left I went straight designing the clothes.”

Mr Bevan’s first collection, which includes eight T-shirts and vests, uses a colour scheme of white, black, blue and pink and designs such as chevrons and a leopard skin-style print.

The clothes vary in price from £8 to £45 and many use the brand name, the definition of gender neutrality, and the logo, an interlocking crescent moon and triangle.

Mr Bevan designs all the clothes himself and they are then handmade at a studio in Milton Keynes using organic cotton imported from Germany. He has had between 20 and 50 of each garment made with manufacturing costs of between £25 and £34 each time.

Mr Bevan is currently working full-time on his business and sells his creations via the company’s website while promoting himself on social media.

He has not yet turned a profit but is hoping to soon and has ambitions to have his own shop in the future.

Mr Bevan said: “The inspiration for this collection comes from the fluidity of gender which no longer exists as the two opposing sides of ‘male’ and ‘female’.

“I had a lot of fabric samples from all over the place and decided on the organic cotton, which is imported and then hand-stitched into clothes at a studio in Milton Keynes.

“I’ve only been launched around a month and I’ve sold about 20 T-shirts. I’m currently based online with my website and social media but I’m hoping to have a pop-up shop in the future.”

Earlier this month, department store John Lewis announced that it would no longer label children’s clothes as either “boys’” or “girls’”.

The decision was praised by many customers, although others have criticised it as “pandering to political correctness”.

TV presenter and journalist Piers Morgan tweeted: “Britain is officially going bonkers”, as well as joking that the retailer should now be known as “Joan Lewis”.

But Mr Bevan says clothing needs to change its attitude towards gender in the same way that society as a whole is doing.

He said: “People should be able to wear what they want and express themselves the way they want, rather than being labelled as male or female. The general perception of gender in society is changing and I feel like we need to acknowledge that change, especially in fashion.

“For babies, clothing doesn’t need to be gendered and when people get older having clothing will help those who might be struggling with their own gender.

“I think people should be progressive in the way they think and open to change. It’s bad to be close-minded because things like this help a lot of people struggling in themselves.”

Mr Bevan says the initial feedback to his clothing has been good and he hopes that as the brand grows he can introduce more designs.

He said: “I’ve had a lot of interest from the LGBT society and I’ve had reviews on my website saying the clothes are great. I know I would have been interested in it when I was younger, I like people who are liberal and progressive.

“I have a fairly good social media presence but I’m hoping to build it up a bit more. I’m also hoping to get in touch with social media influencers to promote the brand.

“I’m looking to expand the range and I’m designing pieces for my next collection at the moment. I’m waiting for a bit more turnover then I will be able to design and produce more.”

Mr Bevan, who attended schools in Wales before moving to Henley and studying at The Henley College, says that while he doesn’t personally know anyone who identifies themselves as he hopes the clothes will be worn by anyone regardless of their outlook.

He said: “I have a diverse friendship group in terms of things like sexuality and while that is different to gender I know people who have had difficulty in terms of how they identify.

“I just really want people to feel good about themselves, especially when they’re wearing something that I have created.”