Music festival in memory of landlady will return next year 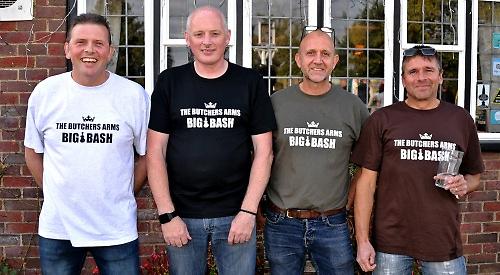 A BEER and music festival in memory of a Sonning Common pub’s landlady has been hailed a success.

Hundreds of people turned out at the Butcher’s Arms pub on Saturday to celebrate the life of Ellie Gallagher Blues, who passed away from liver cancer in July aged 46.

Her husband Rob Blues, 50, organised the event with regulars Andy Houghton, Clive Robins and Graham Field. The money raised at the event is yet to be counted but it is expected to be several thousand pounds, which will be split between the Sue Ryder hospice at Nettlebed and Beating Bowel Cancer. Music was played under two marquees in the pub garden all afternoon and evening.

Performers included The Echo, Better than Life, The Electric Colts, Pure Fluke and Who is Smith. There was also a treasure hunt, face-painting and a barbecue.

Aidan Greenaway, from Woodcote, brought his Ford 2N industrial tractor and half-size steam engine to display in the car park. There was also a scooter run involving clubs from Reading, Berkshire and Maidenhead.

Mr Blues said: “It was about Ellie but it was also about raising money and enjoying the music. People came from all over the place and made it a really good day.  We took more than £1,000 just on the raffle, we were so busy we didn’t have time to do the charity auction.  It was way beyond anything we could have expected.”

The Blueses took over the running of the pub in 2012 and Mrs Blues was diagnosed with liver cancer two years later which spread despite having surgery and chemotherapy. Her condition deteriorated at the start of the year and she spent time at the Sue Ryder hospice at Nettlebed. She spent her final weeks in her native Ireland and passed away on July 30.

Mr Blues added: “Her family had a fantastic day and said she would have been proud of what everyone was doing. They could not believe the turnout. The event will be repeated next year. We’re already looking at how we can make next year’s event better. I just want to thank everyone who came and made it such an amazing day.”