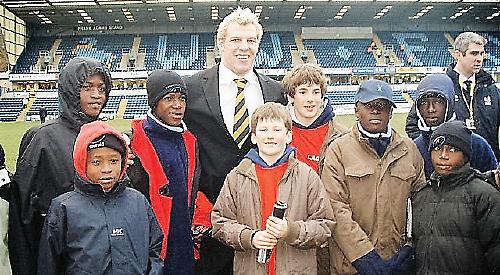 A FORMER rugby player from Whitchurch is seeking sponsors to help bring the sport to poverty-stricken neighbourhoods in Nigeria.

Peter Ferguson, who lives in Swanston Field with his wife Wendy, hopes to raise at least £100,000 a year for the Niger Delta Rugby Foundation, which will coach teenagers in the region while providing a decent education and teaching them life skills.

The 72-year-old is launching it in partnership with Emeka Ukome, a rugby coach whom he befriended when he set up a similar programme in the West African nation more than a decade ago. Mr Ukome kept it going when Mr Ferguson returned to Britain in 2007 but now it is struggling and the pair to revive it.

They are registering the foundation as a charity and have organised a youth tournament which will take place in Lagos in October. It will be attended by several former players including ex-England winger Adedayo Adebayo and former England prop Victor Ubogu as well as ex-Harlequin Ugo Monye, all of whom have Nigerian roots.

Mr Ferguson, a father-of-two and grandfather-of-four, grew up in Scotland and attended the independent Christ College Brecon in Wales, where he developed a passion for rugby. He moved to Henley in the Sixties as his maternal grandfather Ted Batt lived in the town and had been a captain of Henley Golf Club.

From 1962 until 1970, Mr Ferguson played as a hooker and forward for Henley Rugby Club’s first team. In his final year, he was part of a squad that beat Oxford Rugby Club to win that year’s Oxfordshire county cup.

He first carried out community work in Nigeria during the Seventies as part of the Voluntary Service Overseas scheme then spent the following decades travelling across Africa and the Middle East as a petrochemical engineer to the oil and gas industry.

He launched the rugby programme in the mid-2000s after seeing first-hand the poverty that prevailed in the Niger Delta. Mr Ferguson, who is also a lay preacher at St Mary’s church in Whitchurch, says he was motivated by his Christian faith.

His employer Addax Petroleum gave him $50,000 which he used to purchase , build a basic clubhouse and train local adults as coaches. The scheme taught girls as well as boys and encouraged them to go to university, with some going on to work in professions like medicine and the police.

In 2007, he brought a group of children over to play in the Rosslyn Park National Schools Sevens tournament, where they met England flanker James Haskell.

Mr Ferguson, who moved to Whitchurch in 1998, said: “There is a terrible situation with guns, drugs and violence which makes the Niger Delta an incredibly dangerous place. When I first went during the Seventies, at the tail-end of the colonial era, it had been fairly relaxed but in later years I heard of colleagues who were being kidnapped or even murdered.

“It wasn’t uncommon to hear of gun battles breaking out in the street so the situation was pretty desperate and, as a Christian, I wanted to do something to help. The slums were no-go areas for white men but I went in with my rugby ball and it soon became apparent that the kids loved it.

“They enjoyed the chance to just run around and it was a great way to motivate them. We didn’t have proper shoes or kit so we just played ‘shirts and skins’ initially and it slowly built up into a pretty successful club as we went into more schools.

“I remember we played one village against another and there were men and women on both sides knocking the living daylights out of one another. They absolutely loved it and so did all the spectators who were screaming and laughing on the touchline.

“It was, and still is, a dangerous place. We had armed escorts and you certainly couldn’t go out at night for fear of being kidnapped, but once you were known and trusted in those areas, always got back to the right people to leave you alone.”

In 2009 Mr Ferguson travelled to Sierra Leone, where he set up a similar scheme which is still running under local management, while his younger son William, 35, a freelance physiotherapist, helped to launch a rugby coaching and education project in Kenya.

William still supports this by giving advice to founder Azim Deen, an eminent Kenyan businessman. The rejuvenated Nigerian foundation will be open to children from all 120 schools in the Niger Delta and will teach them to become community leaders and role models for future generations. They will also learn about etiquette and social skills as well as public speaking.

It will welcome players of all faiths in a bid to defuse tension between the country’s Christian and Muslim populations. It’s hoped that it will deter young people from joining radical Islamist terror groups like Boko Haram, which has committed numerous massacres, suicide bombings and mass kidnappings across Nigeria and neighbouring countries.

Mr Ferguson said: “When I left Nigeria I had no money to contribute but Emeka was able to keep it going in the background, which is encouraging. Now we want to get it up and running again.

“We will integrate all the best practices that have been developed at other projects, including my son’s. It’s very important that we keep it inclusive and get children from different religions or none playing together.

“We will also be completely transparent about where the money is going. Corruption is widespread in Nigeria so we will need to do that in order to assure people that we are fighting it and not contributing to the problem in any way.

“Rugby is a great way of bringing people together and starting friendships but this is about so much more. The important thing is giving the children hope that they can do what they want with their lives. We encourage them to have a big vision and not be held back by the idea that anything is out of reach.

“We help them develop strong values and become future leaders. We’ve seen children from the slums go on to university and when they come back home they’ll be able to encourage the next generation to do the same. It’s absolutely crucial that the work is self-sustaining.

“Sadly, Nigeria is society with a small number of wealthy, greedy people. That’s why people are keen to move away but we think they should be able to succeed in their own country.

“I work by the golden rule of ‘do unto others as you would be done by’. It isn’t always easy for those kids but it’s wonderful to see their smiling faces. It’s a great privilege to help as we have so much and they have so little but we can make a real and lasting difference.”

Anyone who can sponsor the foundation or donate kit should contact Mr Ferguson on 07557 383634 or email peterf@fergie.me.uk