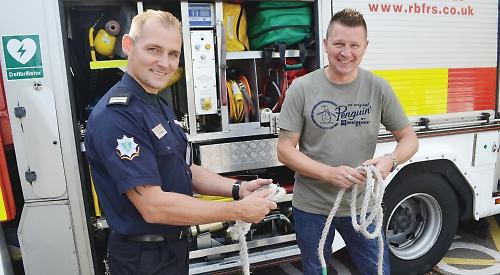 WARGRAVE fire station could still close if more people do not volunteer as firefighters, a senior officer has warned.

The retained station in Victoria Road was saved from closure in April following public consultation on savings to be made by the Royal Berkshire Fire Authority.

Residents across the county were asked to state their preference for seven possible cost-cutting measures to save £1.4million initially and three of these included closing the Wargrave station.

The most popular proposal was to close Wargrave and Pangbourne fire stations and abolish the retained support unit and remotely manage three other stations.

But the authority voted to amend the plan and allow the Wargrave station to stay open for another 12 months during which it must increase the availability of its crew to 60 per cent. The decision followed a campaign by residents supported by parish and borough councillors. A petition was signed by hundreds of people.

The 12-month period will begin this month and retained support officer Jon Murby says the community must now focus on the target set.

He said: “It’s all good that we now have this year to get new faces in but unless the community helps out with recruiting we could still close.

“The crewing issues mean the appliance is not available for the majority of the time. At this station there is sometimes a high turnover.

“Due to the training that is required, it would be worthwhile getting people in sooner rather than later in order to get them to the level we need.

“If we don’t have 60 per cent cover each month by next October the station could face closure.” The station currently has six retained firefighters with another three recruits currently undergoing training. The aim is to have 15.

Mr Murby said: “A new trainee can benefit from the various qualifications they will pick up which they can carry into their everyday lives and jobs, such as first aid and risk assessment. They could also become a fire marshal for their employer.

“You also get some good camaraderie and a chance to socialise with new people while earning money.

“We pay for the time you are at the station training, which is three hours a week, as well as for any callouts. There’s also an annual retainer fee for providing cover, which can even be when you are at home sleeping!

“The target arrival time is seven minutes so if you live or socialise in this area and are within that you can join. We would really like to see people who could give us daytime cover from Monday to Friday. That could be people who work in the area or housewives and husbands with children at school.”

Wargrave station has historically had problems recruiting firefighters and nearly had to close in 2014 after two-thirds of the crew left in two years.

This meant that if one of the remaining four retained firefighters had resigned, the station would no longer be allowed to respond to 999 calls and could be forced to close.

The availability of crews has been as low as 2.4 per cent but last year rose to about six per cent.

Anyone interested in becoming a retained firefighter can attend a recruitment session at Whitley Wood training centre tomorrow (Saturday) from 10am to 3pm. For more information, visit www.rbfrs.co.uk