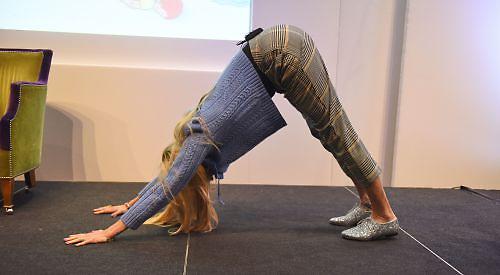 The broadcaster, 36, was talking about her children’s book, Yoga when she showed the audience the downward dog pose at Court Club.

Cotton, who has two children - Rex and Honey - with husband Jesse Wood, the son of Rolling Stones guitarist Ronnie Wood, was in conversation with journalist Bryony Gordon about the book and the benefits of yoga.

She told the crowd: “When you think about kids doing yoga you think ’re a bit of a k***head!’. The book had to be realistic.

“I’ve probably been more focused in the last four or five years, especially since having kids, on doing lots of things that make me feel really good.”

Cotton, who has written a series of books, said she wasn’t ready to an autobiography just yet.

“I think you’ve got 86 to write an autobiography or have had a very colourful life,” she said. “To have any semblance of a private or normal life, I’ve got to keep some stuff back.”

She also revealed she kept a diary every day from age seven to but added: “I got to about 29 felt huge pressure from them and a burden from them. I burnt it all, the whole lot, every single diary.”

After more than 20 years working in , she cited working with Sir Terry Wogan on Children In Need for 12 years as the highlight of her career.

She called the late star, who died in January last year, “one of a kind” and “other ".

“That can’t be topped,” she said. “There’s no way I could have worked with a better individual – he was the perfect broadcaster.

“I learnt so much from working with him and he was so kind and so brilliant. I was devastated when he passed away.”

She also recalled interviewing Prince Harry when she was in her mid-twenties.

“When I was in Clarence House I thought someone was going to remind me I shouldn’t be here,” she said.

On her least favourite she singled out the Xtra Factor, the X Factor spin-off series, saying: “I’m not really into that way of music being created - I’m not against it. I found the whole thing quite daunting.”