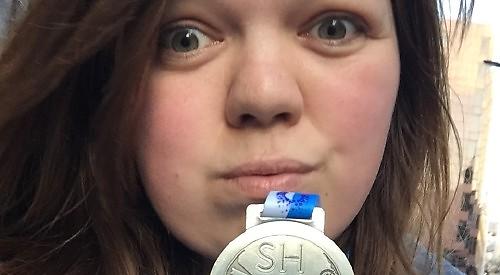 A SUPERVISOR at a garden centre near Wargrave completed a nine-hour night-time walk to raise money for Cancer Research UK for the third time.

Jade Armstrong, who works at Hare Hatch Sheeplands, and her father Martin were among hundreds of people who took part in the annual Shine Night Walk in London.

The 26-mile (42km) course began in Southwark and finished at Old Billingsgate in the early hours of the morning.

The pair wore Cancer Research shirts for the walk and each received a finisher’s medal. They also took part in last year’s walk, when Mr Armstrong collapsed and had to be treated by paramedics before continuing.

Ms Armstrong, 25, from Winnersh, said: “A relative of mine suffered from cancer and that’s what really prompts me to do this.

“It was tough, especially as I had to get to work later that morning but I made it and it was all worthwhile.”

She has raised more than £500 for the charity over the three years she has taken part.