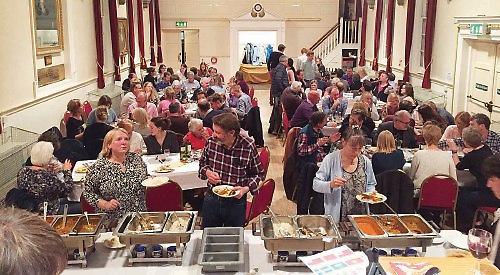 A QUIZ night in Wargrave was staged by a University Challenge winner.

Julian Sutcliffe, who was part of the team from Peterhouse College, Cambridge, that won the BBC show last year, asked the questions at the event at Woodclyffe Hall in High Street, which was in aid of Reading homelessness charity Launchpad.

More than 80 people took part in the quiz in teams of up to 10 and a curry supper from the neighbouring Haweli restaurant was served.

Mr Sutcliffe said: ‘It was great to have so many people. While I was perhaps no Jeremy Paxman, the standard of answers was excellent, even to some of the more fiendish questions.

“The winning margin was half a point — you can’t get closer than that!”

Launchpad’s fund-raising and relationship manager Eleanor Buckley spoke at the event, which raised more than £1,400.

Mr Sutcliffe’s father Sean said: “A number of people came up to me afterwards to say how they welcomed learning more about the issues and what can be done about it locally.

“We all have preconceptions about homelessness but, of course, it’s a complicated issue.

“We were reminded that it’s not just about losing a roof from over your head, it’s also about losing self-esteem, confidence and purpose and can happen to almost anyone.”

Launchpad will hold its annual Carols by Candlelight service at Reading Minster on Thursday, December 7 from 6pm. For more information, email fundraising@launchpad
reading.org.uk