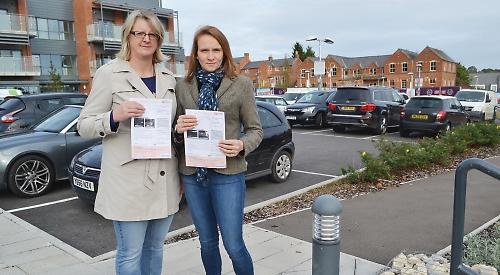 RESIDENTS have been given parking tickets after driving through the site of the new Townlands Memorial Hospital in Henley.

At least seven people have been issued with a £60 fine after using the one-way system at the hospital off York Road and being caught by CCTV cameras monitoring the car park.

Two women received notices with timestamped photographs of their cars entering and leaving the site, suggesting they had spent up to four hours at a time in the car park.

But the women claim that in fact the cameras failed to record them leaving the site, meaning that they were photographed again when they returned, so the system thought they had been in the car park the whole time.

A man received two fines, including one which claimed that he had
re-entered the car park from York Road just two seconds after the other one said he had left via Clarence Road.

The car park is enforced by Smart Parking, which recently lost its contract to do the same at the car park at the neighbouring Bell and Hart Surgeries following repeated complaints by patients about incorrect fines.

People visiting the hospital can enter their registration details on a keypad at reception to receive free parking and there is meant to be a 20-minute grace period for those passing through or dropping off patients.

Liz Singer, Teresa Edwards and a third woman, who all live in King’s Road, were fined within three days of each other after driving through the site.

Mrs Singer, 38, received a ticket for Friday, September 22, which showed her car entering the Townlands car park at 8.20am and leaving at 9.17am.

In fact, she actually passed through earlier while on the school run before returning home and then went through again shortly after 9am to pick up her dog from the vet. Mrs Singer, a personal assistant, said: “Basically, they are not showing me leaving the first time or entering the second time so it looks as though I have been parked there and not paid.

“I have actually just driven straight through, which many residents of King’s Road, York Road and Clarence Road do all the time.”

She said she knew of at least seven people who had been wrongly penalised.

Mrs Singer said she immediately appealed her fine, only to receive another ticket for Tuesday, September 26.

She said: “I’m not paying for something I haven’t done. I don’t want the bailiffs to come round but I also don’t want to pay and I will fight this.

“I have also emailed the Friends of Townlands and will be writing to our local MP as Townlands needs to cease using a company which is issuing local residents with charges that are not valid.”

Mrs Edwards’s notice said she had entered the site at 7.54am on Saturday, September 23 and hadn’t left until 2.14pm, even though she had been in Reading watching her son Thomas play football from 11am to 1pm and then went for a pub lunch in Wargrave before returning home.

Mrs Edwards, 48, a finance manager, said: “I was aware this was happening and was surprised I hadn’t had a ticket but when I got home one day there it was and I was quite cross. Liz had received hers the day before.

“I put in a claim because I thought they must have pictures of me coming out of the car park a few seconds after the first picture and a few before the second picture.

“If we had parked in the hospital illegally we would put our hands up and pay because we know the rules.”

Her partner, who regularly drives through the site when looking for an on-street parking space, has since received a fine. Mrs Edwards said she supported efforts to stop shoppers abusing the car park, which was why enforcement using automatic numberplate recognition cameras was introduced.

But she added: “The cameras must not be working properly if they can’t clock me coming out.”

Last month, the two GP surgeries cancelled their contract with the company, saying that the number of complaints from patients was taking up hours of staff time and some receptionists had even been threatened by angry drivers.

Smart Parking, which is based in Birmingham, had to be given 90 days’ notice, so the arrangements will not end until November 28. Mrs Singer suggested that the hospital should at least review its contract with the company in light of the doctors’ decision.

She added: “We are residents living close to Townlands who have lived through the disruption of the demolition and rebuilding of the hospital and are appalled that they are continuing to use this company when it is inflicting so much stress on us.”

Ian Reissmann, who chairs the Townlands Steering Group, said he encouraged people who had been affected to go through the official appeals process and also pass on the information to him and he would pass it on to NHS Property Services, which owns the hospital site. He said: “NHS Property Services claims this has been fixed but not everyone has yet got their money back.

“If people can provide as many cases as possible for us to present we can show the system is not working and get them to cancel it.

A Smart Parking spokesman said: “We were brought in to manage the Townlands car park and ensure that parking spaces are always available for those that need them.

“There are numerous signs across the car park that highlight the terms and conditions of use and the vast majority of motorists use the car park without any issues.

“For those motorists who do receive a charge we operate a British Parking Association audited appeals process and would encourage motorists to use it if they think there are genuinely mitigating circumstances in their cases.

“The final arbiter for the industry is the independent Parking on Private Land Appeals service and we will always abide by its decisions.”