Pupils give 160 boxes to food bank in Harvest celebration 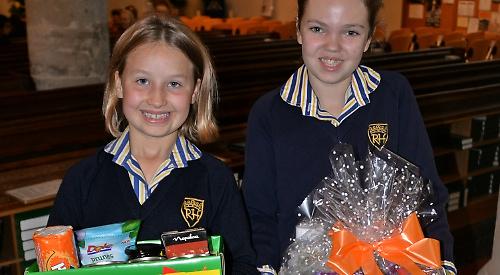 PUPILS at Rupert House School in Henley have donated about 160 boxes of goods to the town’s food bank.

The parcels, which contain dried and tinned foods as well as toiletries, were given to the Nomad youth and community project at a Harvest festival service at St Mary’s Church.

The children had decorated them with autumn designs including leaves, trees, butterflies and pumpkins.

More than 100 parents attended the service, where pupils gave readings and sang hymns and songs including He’s Got The Whole World In His Hands, Think Of A World Without Any Flowers and All Things Bright And Beautiful.

Sue Prior, from Nomad, gave a speech of thanks and the Rev Canon Martyn Griffiths, rector of St Mary’s, delivered the final blessing.

A collection was taken for the Felix Project, which feeds homeless people in London using food that would otherwise have been discarded.

The independent school in Bell Street has been supporting Nomad’s Light House food bank initiative for the past four years as part of its personal, social and health education curriculum. Headmistress Clare Lynas said: “The children have been extremely generous. They were advised to bring shoeboxes but some have brought much larger parcels and they’ve clearly really enjoyed decorating them as they look fantastic.

“It’s a bit of a cliché but charity begins at home and we believe it’s important to support good causes in the community. Nomad provides a wonderful service and we want to do something positive for them.”

Mrs Prior, who is Nomad’s funding co-ordinator and family support worker, said: “We’re enormously grateful for the school’s donation, which along with other schools’ contributions, makes up a significant quantity of the help we give.

“We’ve delivered 235 food parcels over the past year, helping 298 adults and 319 children, and last year we gave out more than 100 Christmas parcels to Henley families.

“Our contribution is quite small considering that food banks give out more than a million food parcels a year nationally but they make a huge difference to the people that need them.”