Theatre named best in UK for second year in a row 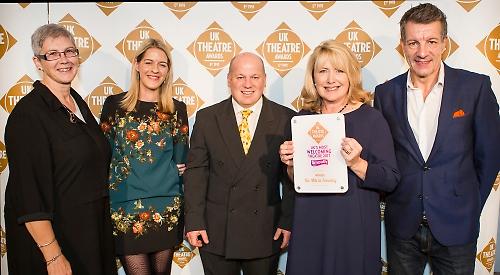 THE Mill at Sonning has won an award for being the country’s most welcoming venue for a second year in a row.

It was shortlisted after winning the South-East title in the UK Theatre Awards, run by trade body UK Theatre, last month.

More than 40,000 public votes were cast for 200 venues across the country in the competition.

The prize were presented to managing director Sally Hughes, who attended the ceremony with staff members Joan Farnese, Vanessa Hicks and David Vass, at the awards ceremony at the Guidhall in London on Sunday (15).

She was given the award by Paul Phear, a presenter at sponsor Smooth FM.

The venue has about 100 staff including kitchen and backstage roles.

The foyer and bar underwent a £300,000 refurbishment last year and further work is to be carried out on the kitchen and auditorium next year.