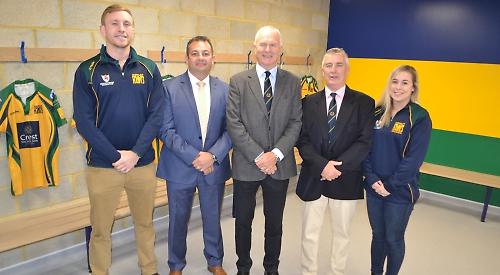 The development is the second phase of a project to transform the club’s facilities at Dry Leas, off Marlow Road. The first phase was the refurbishment of the adjoining clubhouse.

A single-storey extension on the western side of the clubhouse provides two changing rooms, a physiotherapy room and toilets that meet Rugby Football Union standards as well as the club shop.

The official opening ceremony took place on Friday evening with a drinks reception attended by more than 100 people.

Both the district council and Henley Town Council contributed towards the cost of the redevelopment.

The reception was followed by a three-course dinner to thank former club chairman Mike Trethewey, who led the club’s fund-raising campaign, before he stepped down in May after four years.

Chris Nixon, who has taken over as chairman, said: “We are delighted that the second phase of our clubhouse redevelopment is now complete.

“We would like to thank all parties who have contributed to the fund-
raising and all who have helped make such a superb facility a reality.

“It’s a very proud moment — it has taken three years to get to where we are now completing the clubhouse and changing room extension.

“The smiles and faces of everyone here makes it all worthwhile. Everyone at the club can appreciate the direction we’re trying to go in.”

Mr Nixon said the facility would benefit all the club’s teams, from the seniors to the mini and junior sections.

Director of rugby Nigel Dudding said: “We have always wanted to have the best facilities and from our point of view it helps enormously when you’re trying to recruit players.

“If they see the first-class facilities we have got, which are probably the best in the league and the league above, it helps players think ‘Henley are serious about their rugby, they want to move forward and be a progressive club’. The new physio centre shows we’re serious in how we treat and look after our guys on the medical front.”

Councillor Hinton said: “It was a really lovely evening to celebrate not just the changing rooms but the chairmanship of Mike Trethewey and I was really proud to be able to unveil the facilities.”

Mr Trethewey said: “What we did as a club was fantastic. If you take the changing rooms and clubhouse, we raised just over £1 million.

“Although I might have been leading the charge, it was very much a team effort.”

The project was also supported by the Trust for Oxfordshire Environment and Grundon Waste Management through the Landfill Communities Fund. About 40 per cent was contributed by members of the club.

John Stephens, Grundon’s general manager of logistics, said: “It’s wonderful to see it come to fruition. It’s great to support the local community and I think it’ll benefit them.”

The club’s old changing rooms, gym, treatment room and offices were in a separate building to the east of the clubhouse and the new facility means players are closer to the pitch when they exit the changing room.