Cubs and scouts chat to their counterparts around world 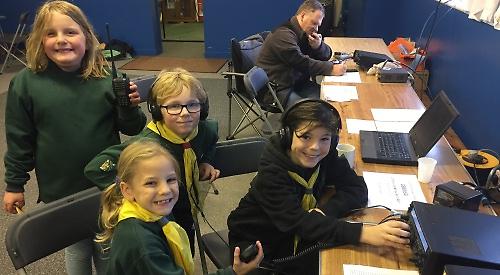 CUBS and scouts in Wargrave spoke to their counterparts across the world using shortwave radios and internet chat rooms.

The members of 1st Wargrave Scouts were among more than a million scouts, cubs, beavers, guides and brownies from 150 countries who took part in the annual Jamboree on the Air and Internet on Saturday, working from the scout hut in East View Road. They used different forms of technology to send greetings to and chat with people in countries including Norway, Italy, Scotland, Ireland, the Netherlands and France.

They also managed to contact children in Indonesia, Brazil, China and Trinidad on the internet and spoke to a scout from a troop in Finland which had hosted the Wargrave scouts when they visited the country for an international jamboree. Scout leader Pete Walsh said: “Jamboree on the Air takes place every year and is a fabulous
opportunity for our beavers, cubs, scouts and local guides to experience international scouting from the comfort of our scout hut.

“It was wonderful to see the smiles on the young people’s faces as friendships were made with other scouts from all over the world.” Meanwhile, the scouts will staging the Wargrave village bonfire and fireworks display next Saturday
(November 4). This will be held in the recreation ground, off Recreation Road, with refreshments available from 5.30pm. The bonfire will be lit at 6pm with the display starting at 6.30pm. Admission is by donation at the gate (minimum of £5 for four).