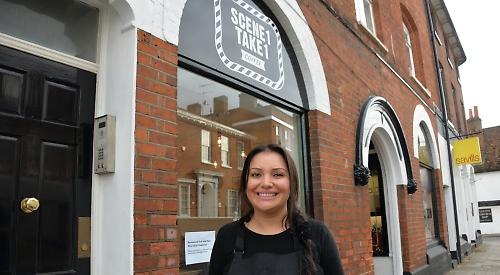 But Sebnem Bamsey insists that Scene 1 Take 1 will offer something different to other cafés with decor comprising film and television memorabilia.

The business opened on Monday at the former Flower Shop premises in Bell Street.

Mrs Bamsey, 38, who lives in Henley, has signed a four-and-a-half-year lease on the unit and has spent weeks preparing it.

She drew inspiration from her career and has adorned the walls with modern and classic film posters that reflect her love of musicals and a green guitar.

Mrs Bamsey, who has appeared in musicals, plays and a feature film, said: “We have got the Kenton Theatre just around the corner and, with my concept, they go together well.

“Before this I was an actress and singer — I’m still doing it but just as a hobby — which is the reason I named it Scene 1 Take 1. This feels like the first scene of a new film.”

The posters feature some of her favourite films, including West Side Story and Fiddler on the Roof as well as one of Larry David, star of American TV comedy series Curb Your Enthusiasm.

Mrs Bamsey said: “It’s mainly things that I like but I wanted a mixture, for example, posters that children can recognise like ET, Back to the Future and Superman.”

She said customers were welcome to strum on the guitar, adding: “If they are really good they can have a free coffee!”

As well as coffee, the shop sells cakes, pastries, sandwiches and paninis. Her meat and fish is coming from Gabriel Machin’s butchers in Market Place.

Mrs Bamsey said: “I make all the savoury things myself. I’ll see how things progress and then add more. All the ingredients are fresh and healthy. I choose organic whenever I can. Eating and drinking are very personal things as each person has a different taste and not everyone likes the same thing. The more variety I can offer, the more people are going to be happy.”

She hopes to promote the shows at the Kenton in New Street by putting up posters, especially ones for productions by the Henley Players, which she joined after moving to the town a year ago.

She is also making the café available for meetings.

Mrs Bamsey said: “I love Henley in the sense that you really can feel the community spirit here and having a place that could potentially be a hub is a great feeling.

“The locals have been really nice and I feel supported.

“People are very happy to have a coffee shop at this end of town and couldn’t wait for it to open.

“Next door we have a solicitor’s office and they have said they’re very excited to be so close.”