Mayor happy to be voted best young councillor in Britain 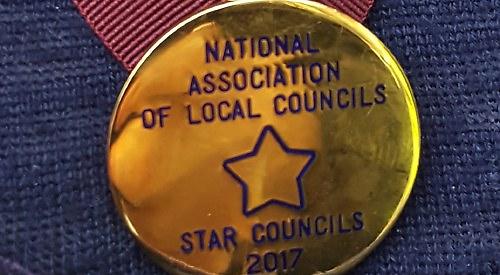 THE Mayor of Henley has been named the best young councillor in Britain.

Kellie Hinton, 32, was presented with a shield, medal, framed certificate and commemorative booklet after being honoured at the National Association of Local Councils’ Star Councils Awards on Tuesday.

She attended the ceremony at a hotel in Milton Keynes on Tuesday with her partner Ben Hinton.

She said: “I was completely stunned when I realised I’d won. There were two other finalists and their names were read out first, so obviously that just left me.

“To be honest, even being shortlisted was completely unexpected so I was just proud to make it that far and didn’t expect to win.

“I was just looking forward to a nice evening meeting people from other councils.

“I had to go up on stage to collect my haul and it was all a bit of a blur. I was already wearing the mayoral chain so I had a lot to carry once they’d given me the medal, certificate and shield.”

Councillor Hinton, who was nominated by town clerk Janet Wheeler, has been on the town council since May 2011, representing Henley Residents’ Group. She has been chairwoman of the Henley in Bloom initiative since 2012 and in May became the youngest ever Henley councillor to be made Mayor.

Cllr Hinton, who lives in Queen Street, said: “This really has been my year as I didn’t even expect to be Mayor. Between that and winning this award, I suspect next year will struggle to live up to it!

“I will probably display the shield and certificate in the Mayor’s parlour and might wear my medal to the next few council meetings.”

Cllr Hinton, who grew up in the town and attended Trinity Primary School and Gillotts School, is head of sales at IBS Office Solutions in Henley and has a seven-year-old daughter, Hallie, whom she often involves in her civic duties.

For a time she lived at the YMCA flats in Lawson Road and became a tenant representative and helped to raise funds to refurbish its courtyard.

She joined HRG in 2011 at the invitation of then mayor Elizabeth Hodgkin, whom she knew through Henley in Bloom’s Gardening Buddies scheme.

She is using her mayoral year to raise money for Henley’s four state primary schools.

Cllr Hinton said: “I’m really happy with how my year has gone so far. I set out to balance the traditional aspects of the role with some new ideas like my outdoor civic service on Mill Meadows in June and I think I’ve achieved that.

“I hope this award will inspire many children, not just my own daughter, and help them see what can be achieved through hard work, regardless of your age or background.

“I think it’s important to recognise young councillors as councils benefit from having members with diverse backgrounds.

“They’re often made up of older people, which is understandable as the role requires you to give up a lot of your spare time. I chose to get involved in local politics because it’s my passion and I really enjoy it.

“Many younger people feel excluded from local politics because they don’t understand how it works. However, it’s very important because it’s at the grassroots of decision-making and gives people a chance to make a real difference.”

The judges said: “We really liked the way that she involves her family in her work and how she juggles having such a young family with the extensive amount of work she clearly does in her councillor role.”

Mrs Wheeler said: “Kellie is pretty special because she’s our youngest ever Mayor and has achieved a lot with Henley in Bloom.

“Of course, all our councillors deserve awards but it has to be someone who really stands out.

“Kellie has done a great job while pushing boundaries with things like hanging the gay pride flag from the town hall, which people are always going to remember.”