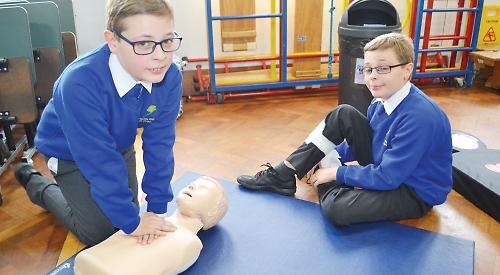 A DEFIBRILLATOR has been donated to Crazies Hill Primary School by the mother of a five-year-old girl whose life could have been saved by one had it been available.

The device was unveiled on Tuesday as part of the school’s health and fitness week.

It was presented by Claire Page, whose daughter Lilly-May Page-Bowden died from sudden arrhythmic death syndrome after being picked up from Willow Bank Infant School in Woodley in 2014.

An inquest found that Lilly-May’s life could have been saved if a defibrillator was available when she collapsed.

Since then Miss Page has raised thousands of pounds to install the devices at more than 30 schools in the area.

She spoke to the Crazies Hill children before presenting the defibrillator to pupils Harry Floyd, 10, and Eddie Ainscrugh-Dixon, nine.

She will hold training sessions for staff and parents on how to use the machine.

Miss Page  said: “I’m doing this so it doesn’t happen to anyone else.

“About 270 children die every year from cardiac arrest but using a defibrillator raises the chance of survival from five per cent to 75 per cent, which is huge.

“Lilly has had a huge impact on everybody, although some schools are still hesitant and there’s a stigma that a defibrillator will cause harm.

“It’s not until they’ve had training that they realise the only harm is going to be caused by not having one.”

Headteacher Philippa Chan, who was previously head at Willow Bank, said she asked Miss Page if the school could have a defibrillator and she agreed.

“We all hope we will never need it but it’s good that we’ve got it,” she said.

During the week, pupils were given first aid lessons by Rachel Moffatt, of Ladybird First Aid. They were taught how to give CPR using a dummy and also tried putting bandages on each other.

These sessions were paid for by the school’s parents’ association.

Pete Adams, founder of Reading health education workshop A-Life Fitness, ran sessions at the village hall for pupils about how to stay fit by eating healthily and sleeping properly.

Mr Adams said: “We had two groups of about 40 to 60 kids and we did a hands-on healthy workshop where they could go round and touch things or watch a DVD.

“It went really well and we had lots of good feedback from the teachers. All the kids seemed to really enjoy it.”

Mrs Chan said: “It’s so important that children make decisions about eating well and exercise. We had some fantastic feedback from the fitness sessions. The children loved it and it was so clever how Pete adapted the workshop for the different ages.

“One parent said their child was so worn out that he fell asleep straight after school!”

Community defibrillators are already available at Crazies Hill village hall and Hennerton Golf Club as well as the Piggott School and the old pavilion in Wargrave.

The latter device was installed in 2015 and paid for by Wargrave Runners using money raised at the annual Wargrave 10km race following a campaign by veteran runner David Moseley.

The defibrillator was supplied by the Millie’s Dream appeal, which has helped install more than 50 defibrillators in schools and communities in and around Henley since September 2012.

The appeal was launched by Sarah Roberts, of King’s Road, Henley, and inspired by her daughter Millie, now 10, who has a heart and lung condition.