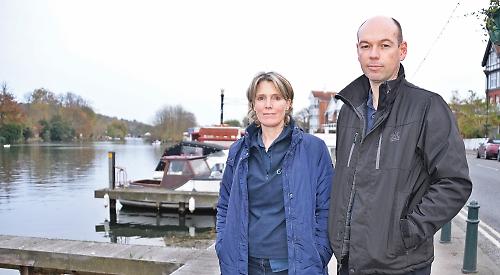 A COUPLE saved an elderly disabled man’s life after he plunged into the River Thames in Henley when his carer lost control of his wheelchair.

Clint and Angela Botha leapt into the water and pulled the man to safety just in time as if he had been under for much longer he could have died from hypothermia.

The couple then waited at the scene while he was treated by paramedics before being taken to hospital.

However, they shrugged off being branded heroes.

Mr Botha said: “We just wanted to help in whatever way we could and I’d like to think we did what anyone would have done in that situation.

“We saw someone in trouble and wanted to make sure they were okay.”

The drama happened at the moorings off Thames Side at about 10.40am on Sunday.

The Bothas, who live in Manor Road, were walking towards the town centre when they saw the man, who was in his seventies, and his female carer, who was pushing the wheelchair along the pavement, and his wife, who was walking next to him. Then the carer appeared to trip on the uneven surface and let go of the wheelchair so that it toppled sideways into the water with the man still sitting in it.

He hit his head on the wooden jetty as he fell.

The two women tried to catch the wheelchair but were dragged into the waist-deep water too and then found they weren’t strong enough to pull it out.

The man, who was wrapped in a sleeping bag, was unable to help himself as he has Parkinson’s disease, which limits mobility.

The Bothas, who run the Physiolistic clinic at Henley Rugby Club, rushed to help and jumped into the water.

They fumbled around under the surface to find the man’s head and then pulled him clear of the chair, which had lost a wheel due to the force of the impact, and then hoisted him on to the jetty with help from two other passers-by.

Mrs Botha then asked the pair to call 999 as their own phones had been ruined by being plunged into the cold water.

The couple also helped the carer and the man’s wife, who had gone into shock, back on to land while the other two helpers fetched a blanket for the man from the Angel on the Bridge pub nearby.

An ambulance and two paramedic cars arrived within five minutes and the crews wrapped the man in a heated blanket to warm him up as quickly as possible and also treated him for a gash to his head.

They were afraid to move him because they feared he might fall off the jetty again and instead they called the fire brigade, who laid down two ladders side by side between the jetty and the pavement and carefully shuttled the man along them on a pallet.

There were traffic jams for more than an hour as the street was partly blocked by the emergency vehicles.

Mr Botha said he and his wife were walking into town for a coffee after dropping off their children at Henley Hockey Club for practice when they saw what happened.

“Angela saw it first and ran into the water, then I followed straight behind her,” he said.

“It looks shallow but there’s a sudden drop-off under the surface and it gets pretty deep.

“We were trying to find the man’s head, which wasn’t easy as he’d been wrapped in a sleeping bag to keep him warm.

“Luckily, it only took about 10 seconds to get him above water and another minute or so to get him up on to the jetty.

“The paramedics said it could have been worse if he’d been under water for even a few more seconds so I’m glad we were able to help.

“His temperature seemed to be going back up as we were leaving so hopefully he is okay.”

Mrs Botha said: “I saw the carer stumble and the man landed in the water with the wheelchair on top of him.

“Obviously I could tell that it was a serious situation and it was amazing how instinct just took over.

“The whole thing was a bit of a blur. We were pretty cold by the time it was all over because it took the fire crews a while to get him off the jetty and it still feels pretty surreal to think about it now.

“Our friends have been asking lots of questions about it because it’s not the kind of thing that happens every day.”

Mr Botha added: “We spent the rest of the day sorting out the insurance on our phones, which is important as we use them for business.

“It was a bit of a nuisance, of course, but it’s nothing compared with knowing we saved somebody’s life.”

South Central Ambulance Service said the man and his carer were taken to the Royal Berkshire Hospital in Reading for treatment for hypothermia.Henl