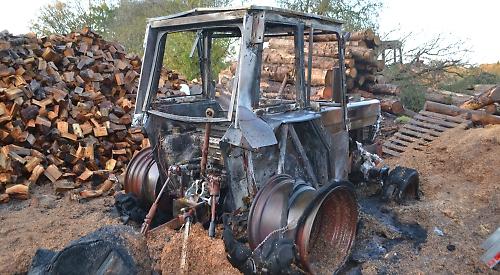 A TRACTOR and afirewood processor worth tens of thousands of pounds were destroyed in a fire at a sawmill.

The blaze at Mackrory & Sons in Nettlebed happened at about 1.30pm on Monday.

It is thought to have been caused by an electrical fault on the tractor and the flames spread to nearby wood, sawdust and the processor.

Firefighters from Henley and Wallingford were called to put out the fire and spent more than two hours at the scene.

Sawmill owner Alan Mackrory said: “We were having lunch when we heard a noise and thought it was a customer. We came out to look and found the tractor on fire.

“It was turned off so it must have been electrical. The processor is only a year old so I’ll have to buy a new one. I can’t do without it.”

He said the two machines were worth about £30,000 but were not insured.

“If you’d asked me before I’d have said insurance’s not worth it but obviously now I’d say different.”

The family business was started by his father Maurice and Mr Mackrory joined in the mid-Eighties when took on the tenancy of the Nettlebed sawmill. His father died in 2015, aged 81.