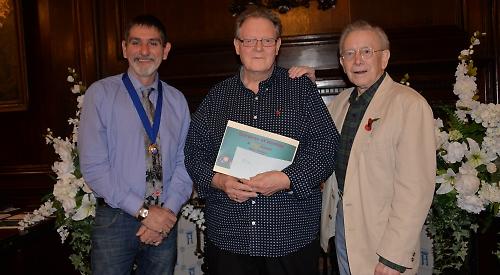 ABOUT 30 people attended the annual Gardens of Henley awards ceremony on Wednesday.

Prizes were given out to the 18 entrants by Henley Mayor Kellie Hinton and singer Vince Hill, from Shiplake.

Each garden received a score and was ranked either gold, silver gilt or silver – which is how Britain in Bloom competitions are marked.

The event was held by Henley in Bloom and Henley Allotment Association at the town hall.

It was judged in August by Henley in Bloom committee members Caroline Langer, Councillors David Eggleton and Sara Abey as well as town councillor Sarah Miller.

The overall winner was Keith Thatcher, of Market Place, who won a gold award. He will also recieve the Henley in Bloom Challenge Cup.

A gold awards was also given to Geoffrey Chipp, of Reading Road, for his front garden.

Silver gilts were awarded to Bronwen Coussens, of Ancastle Green, and Sally Pearce, of Gainsborough Hill.

Councillor Hinton, chairwoman of Henley in Bloom, said: “I have to start with apologies because we usually hold this event in September but I have been a bit busy this year and we have a couple of committee members who have been on long term sick leave.

“We are going to focus on residents associations and It’s Your Neighbourhood entries – a smaller version of Britain in Bloom that is about communities coming together to make a difference in their street scene.

“Next year we are also going to be completely overhauling our own competition.”

The allotment association also give out their prizes for best plots and best newcomer at Watermans and Greencroft allotments.

For the full story and pictures, see next week’s Henley Standard.