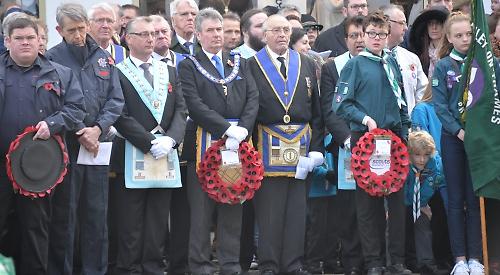 HUNDREDS of people gathered in Henley today to remember the fallen and mark Remembrance Sunday.

Crowds gathered to watch a parade and service outside the town hall, which was led for the final time by Rev Canon Martyn Griffiths who is retiring in January.

Brig Malcolm Page, president of the Henley Branch of the Royal British Legion, read the Ode to Remembrance. Standards were lowered as The Last Post was sounded and a two-minute silence was observed.

Reveille was then played before the Kohima Epitaph was read aloud by Brig Page.

Hymns were sung and there was an address by Henley Mayor Kellie Hinton.

The Mayor’s cadet Harry Ellis, from Sonning Common, read In Flanders Fields, a poem by Lt Col John McCrae, and army cadet Lillie Malha read We Shall Keep the Faith by Moina Michael.

Speaking during her address, Councillor Hinton said: “The funds you donate in return for your poppy go to the Royal British Legion, who ensure that it reaches the needy, both the veterans themselves and their dependents.

“There are still a total of six million people in this country who are entitled to call on the legion for help.

“Every penny is spent with the greatest care and your generosity is most welcome and appreciated.

“This is the most appropriate place in Henley to hold this service. I am flanked by the names of the Henley dead of the First and Second World Wars.”

When Councillor Hinton finished she read a poem written by pupils from Sacred Heart Primary School, who wrote about what remembrance means to them.

Wreaths were laid by civic dignitaries, community groups and veterans and there was a march past by those in the parade.

After a reception was held in the town hall where the public were invited in for tea, coffee and biscuits.