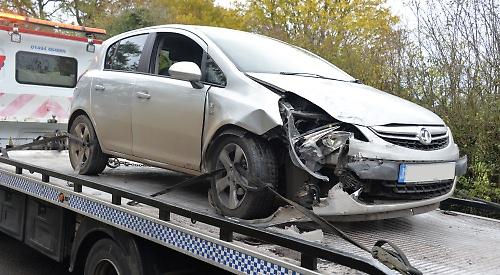 The silver Vauxhall Astra and white Volkswagen Caddy were involved in an accident on Greys Road, near the junction with Gillotts Lane, shortly before 9am.

There was damage to the front driver’s side of both vehicles and the road was closed while they were were recovered.

The driver of the VW, Peter Clark, 61, a plumber from Sonning Common, was on his way to a job in Henley.

He said no-one was injured in the collision but the woman driving the Vauxhall, who he said was in her twenties, had a young girl in the back of the car.

The collision comes exactly a week after a silver Suzuki and a blue Peugeot collided on the same road further up between Highlands Farm and Rotherfield Greys.