Drinker goes dry for month and raises £600 for Macmillan 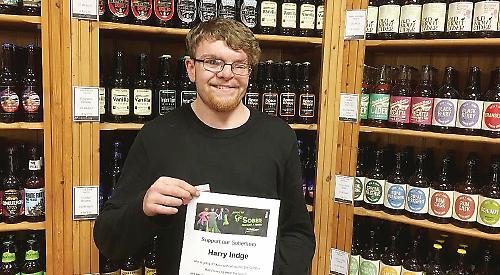 A MAN from Charvil raised almost £600 for charity by giving up alcohol during October.

Harry Indge, 21, was sponsored not to drink throughout the month in aid of Macmillan Cancer Support.

He was inspired by a television advert for the charity’s “Go Sober for October” fund-raising initiative.

Mr Indge, who works at Hare Hatch Sheeplands garden centre, near Wargrave, said: “After seeing the advert, I thought why not go for it?”

He had collection tins at work and put up posters promoting his efforts.

Mr Indge, who normally drinks with friends at the Duke of Wellington in Twyford, said his first few days were easy but then he began to think about going to the pub. He said: “The last week was the hardest because I knew I was so close to the finishing line.

“I celebrated with a quiet pint down the Duke with my pals.

“What gave me a great deal of satisfaction was proving some of them wrong after they claimed I would not keep it up for the whole month.

“I have to admit I did feel healthier without drinking and I do think the project has made me feel a more responsible person.”

Andy Sherwood, general manager of the garden centre, said: “We are proud of the charity work our employees undertake.”