Halloween ales featured at beer festival in aid of schools 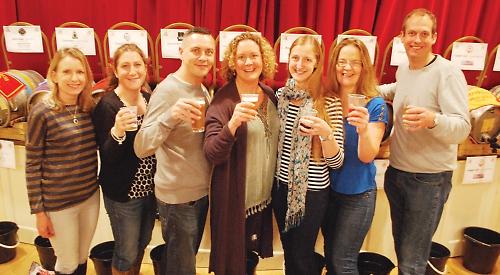 A BEER festival in Wargrave raised more than £1,700 for two schools in the village.

More than 100 people attended the event, which was held at Woodclyffe Hall in High Street and featured 10 beers provided by breweries from as far as Cheshire and Edinburgh.

Some of the beers featured Halloween-themed names, including Treacle Treat, made by the Wadworth Brewery in Devizes, and Scary Man, brewed by the Long Man Brewery in East Sussex.

The annual event is organised by Ian Wild and run by a different benficiary each year. This year it was the turn of Robert Piggott junior and infant schools, which are raising money for an IT suite and library and a new teaching area.

Emily Harris, a member of the schools’ parents association, said: “It went really well. We had more than 100 people present and everyone had a good night.

“The pale ales were very popular but we didn’t run out of anything. The atmosphere was great, even at the end when some of the men were struggling to choose what to have!”