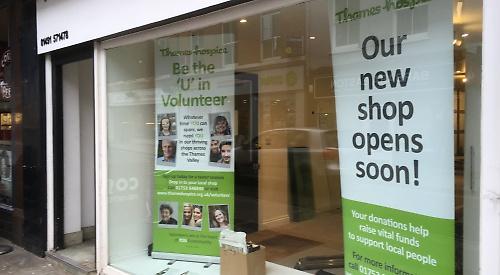 A NEW charity shop is to open in Henley — the town’s seventh.

The Thames Hospice shop has taken over the former No 27 menswear store in Duke Street, which closed in August. It is the sixth charity shop in the street.

It will open next Friday (December 1) with a ribbon-cutting ceremony at noon and a late-opening evening as part of the town’s Christmas festival. A nurse from the Windsor charity and a patient who has experienced its care will be present to talk about the charity’s work.

The “boutique” shop is the charity’s 18th and one of 10 new retail outlets designed to increase the income needed to fund extra services. Julie Rowley, the charity’s retail director, said: “We’re going to be moving to a brand new site in Bray with 28 inpatient beds so fund-raising and retail need to expand to support the move.

“We’re absolutely delighted and excited to be opening in Henley. It’s a fabulous town and we want to embrace and be part of the community.

“With all our shops we go out of our way to make sure we’re supporting events that are going on.”

Mrs Rowley said: “Our shops are fitted out with a very stylish interior with a dedicated team to offer excellent customer service.

“We’re kind of pitching ourselves against high street retailers rather than what you might expect from charity shops. I think it’s actually positive if you have got, say, five other charity shops in the area. The customers who support them like to have a selection to choose from.”

Town manager Helen Barnett said: “We would rather smaller independent retailers but the unit has been filled very quickly by the agents. The difficulty is the landlords want their units filled and charity shops pay good rent and that’s why they pick charity shops.

“Thames Hospice has assured everyone that their shop will be fitted very nicely and is going to be more of a retail space than a charity shop so we hope that it will be a slightly different concept.

“There are also a number of people in Henley who shop in the charity shops and they provide an outlet for fund-raising and do great things so it is a double-edged sword.

“It is a shame that it is another charity shop but we would rather have the units full.

“At the end of the day it’s about getting the people of Henley to come out and support Henley. Whether it is a coffee shop or a charity shop or a small independent, we need people to come here to sustain the footfall.”

The other charity shops in Duke Street are Sue Ryder, the Oxfam bookshop, Cancer Research UK, Helen and Douglas House and Blue Cross. There is another Oxfam shop in Market Place.

Tim O’Sullivan, who ran No 27, decided to retire in August after more than seven years in the town.

He said his business costs had been rising due to high rent and business rates while his income was dropping as footfall in Henley town centre had decreased.

The Thames Hospice shop will employ a full-time manager and a part-time assistant but the charity is appealing for volunteers to drop in or call (01753) 842121. Donations are also welcome.