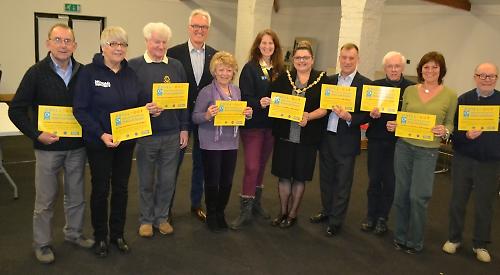 Henley Lions Club has launched a campaign which it hopes will raise thousands of pounds to help local people who are struggling to pay their energy bills.

It is working with Henley Citizens Advice, which helps people in debt, and the Nomad youth and community project, which helps families in need.

Everyone born before May 5, 1953 receives a fuel allowance of between £100 and £300 from the Government. The Lions say there are some people who don’t need the money and are asking them to give it to those who do.

It is the second year the club has run the winter fuel campaign.

Last year it raised almost £7,000, which helped 42 people in fuel poverty in the Henley area to pay their bills.

Wendy Franklin, president of Henley Lions Club, said: “We did very well last year. It was such a success and it helped a lot of families. People think that in Henley everybody is doing fantastically well but there are people who aren’t. There are a lot of wealthy people in Henley who don’t need the allowance. If it just goes into the bank and is sitting there, give it to someone who does need it.”

Mayor Kellie Hinton, who attended the campaign launch at the d:two centre, said: “This is a really great initiative by the Henley Lions.

“It’s another example of how much they are helping the community and thinking of people that are often forgotten. I’d encourage people to support it.”

All donated money goes only towards the cost of heating, lighting and cooking. Clients put forward for help have received guidance from Nomad or Citizens Advice, helping to ensure they are receiving the benefits due to them and they can start managing their debts.

The scheme is sponsored by the Shanly Foundation and leaflets and posters have been distributed to doctors’ surgeries, pubs, churches and golf clubs in Henley and the surrounding villages.

Donations can be made online at www.henleylions.org.uk or by cheque and bank transfer. If you can help, call the Lions on 0845 833 7387.