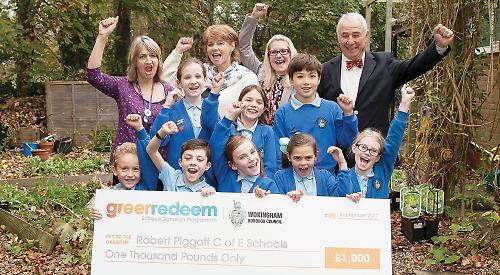 TWO schools in Wargrave have been given £1,000 by a recycling rewards scheme.

Robert Piggott junior and infant schools were presented with the money after collecting more than 230,000 points in Greenredeem’s green schools programme.

The scheme encourages residents to collect points through eco-friendly activities such as recycling, saving water and leading a greener lifestyle and then donate these to schools.

The Wargrave schools have established “eco-teams” of pupils which introduced intiatives such as composting and a Switch-Off Fortnight which saved power by turning off lights and machines.

Pupils also monitor the amount of electricity used in classrooms by making weekly temperature checks and reading the meters.

Mrs Akers said: “It’s an honour to be awarded this grant. The children at our schools have such a passion for green living and conserving the environment.

“We’re thrilled to know we can support our eco-teams’ plans to motivate the schools to recycle more, save energy and continue to grow our own food at the schools’ allotment.”

Councillor Halsall said: “I’m delighted to see the borough’s recycling rewards programme continuing to benefit the whole community and specifically such a worthwhile cause that the schools have adopted.

“The schools donation programme is an excellent way to use well-earned Greenredeem points and encourage local children to think about sustainability.”