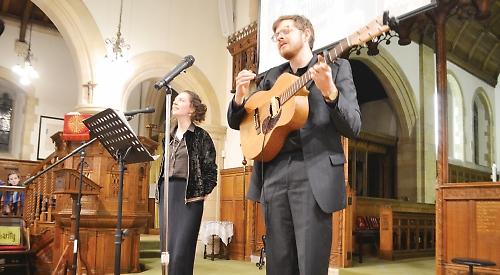 CHILDREN and a singing curate were among the performers at the annual concert at St Mary’s Church in Wargrave.

Hundreds of people packed into the church in Station Road for the seventh event.

The choir from Robert Piggott Junior School in the village sang Keane’s Somewhere Only We Know and The Call from the film The Chronicles of Narnia: Prince Caspian.

The concert was opened by organist Ben Giddens, who performed J S Bach’s Toccata and Fugue in D minor, while cellist Laura Anstee played two compositions on the anniversary of her move to the village.

Wargrave curate Hugh Barne, who was ordained in July, played the guitar alongside his wife Grace on the violin. They performed Johnny Cunningham’s Murdo of the Moon and When Will I Be Changed by Josh Ritter.

The audience were invited to sing along for Mr Baird’s performances of Do-Re-Mi and My Favourite Things from The Sound of Music.

The event raised more than £1,100 for the church’s 21st Century Project to build a new annexe.

Lay minister Andy Ferguson said: “It was an outstanding success. The age of the artists was between eight and 86 and the comments we’ve had back was that the concert was the best ever.

“The audience loved the variety of ages and music — one piece was written in 2016 and another, Monteverdi is from the 16th century.”

Next year’s concert will be held on Saturday, November 17. The church will also be hosting a choir from Dallas in July after being put in touch by Apollo5.