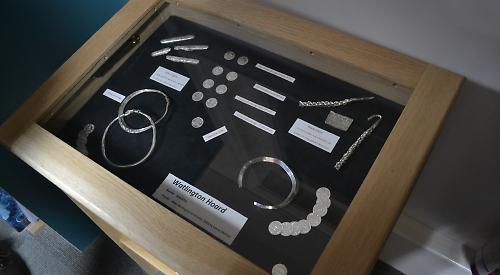 A REPLICA of a £1.35million treasure trove found near Watlington has been unveiled.

Metal detectorist James Mather uncovered the Viking-era ingots, bracelets and coins, known as the Watlington Hoard, in a field near the town in October 2015.

The original has since been acquired by the Ashmolean Museum in Oxford but residents and visitors can now view the recreation at the town’s library.

The items will be go permanent display in a glass-fronted cabinet with labels describing each piece.

Also present were representatives from the library and Friends of Watlington Library and resident Tim Horton, who helped bring the replica to the town.

They crowded around to inspect the replica and to read an information panel with photographs explaining the discovery.

Councillor Hill: “Thank you to James for finding it as none of us would be here without him.

“We also thank the Ashmolean for looking after it and all the people in the town who have put a lot of effort into this.”

The hoard, which dates to the time of King Alfred, is thought to be the most significant discovery of its era in Oxfordshire and was acquired by the Ashmolean following a fund-raising campaign.

Selected items from the hoard were put on display in the library in High Street in September as part of a day celebrating its homecoming.

Mr Mather, who lives in Tilehurst, said: “Having a replica is a great idea. The Ashmolean is the natural home for the hoard itself but given that it was found near Watlington, why not use it to create interest and hopefully inspire people?

“I’m really pleased at the way the people of Watlington have taken the hoard to their hearts and taken ownership of it. It has effectively rewritten a small part of Anglo-Saxon history.”

Dr Baker added: “The hoard has been on display at the museum since January and since then we’ve had hundreds of thousands of visitors.

“We have also held special events, had group bookings and private viewings before the museum opens. It has had an impact on groups from schoolchildren all the way up to friends of the museum.

“It was important to keep the hoard in the area as it’s something that resonates with people. It’s local and it’s a part of their history.

“Lots of people are very interested in the Anglo-Saxons and are happy that they can come and see the hoard at the Ashmolean free.”

Historian Mr Horton, who has helped co-ordinate events around the hoard, said he hoped Watlington could become a “Viking centre” and even host historical re-enactments.

He said: “I think the hoard gives a new sense of our place in history and in geography.

“It has been a real adventure for me because, although I have a general background in history, I’ve learned so much in the past year.

“I’m pleased by the way youngsters in the town have taken on that excitement about the discovery.

“When we had the event in September the Viking team from the museum were so impressed by their knowledge.

“The key thing now is to keep the excitement going and possibly in the future we could stage a battle between Saxons and Vikings!”

Mrs Southwell said: “It’s fantastic that the people of Watlington want something like this for the community to see and be part of. It’s something to be shared between them.”

The find is significant because it contains so many coins of Alfred the Great, who was King of Wessex from 871 until 899, and his lesser-known contemporary Ceolwulf, who ruled Mercia from 874 until his death in 879.

There are 13 examples of the rare “two emperors” penny, which shows the pair seated side-by-side. This suggests an alliance between their kingdoms, which challenges historical claims that Ceolwulf was a “puppet” of the Vikings.