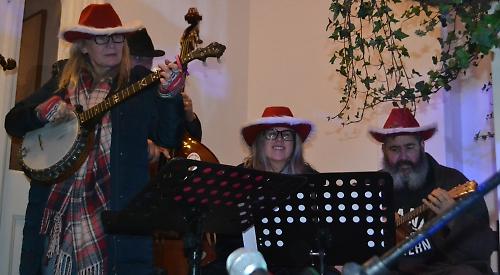 A BARN dance band performed to about 150 people on the second night of the Henley Living Advent Calendar.

The Hairy Molly Barn Dance and Ceilidh Band, led by Martin ‘eek’ Cooper, performed to a crowd on the lawn of Leander Club last night (Saturday).

The seven-piece group played about half a dozen of their own songs, including Grasshopper Sitting on a Sweet Potato Vine and Fly Around, as a light drizzle fell.

The chosen charity for the evening was Valley Road Primary School and supporters were collecting donations and selling raffle tickets before the performance.

Richard , who chairs the calendar, thanked the rowing club for hosting the evening and joked that the calendar had been allowed to ‘lower the tone’ on the lawn.

he told the Henley Standard: “Martin is a special man and friend of the advent calendar. He embodies festive cheer and quality and it was fun as well.

“It was a great crowd and everyone was committed and passionate about tonight’s performance. It was also great to see the school here en masse.”

Mayor Kellie Hinton, who has chosen to raise money for the town’s four state primary schools for her year in office, added: “We’re very fortunate to have such amazing schools in our town but they are struggling, as are all schools across the country.”

Valley Road’s headteacher Tim Coulson said: “What a wonderful evening. Giving money to a school right now is an absolutely essential thing and I can’t thank the Mayor and town council enough.”

Tonight’s performance (Sunday) will be held at Phyllis Court Club, off Marlow Road.

For a full round-up of the Living Advent Calendar so far, see next Henley Standard.