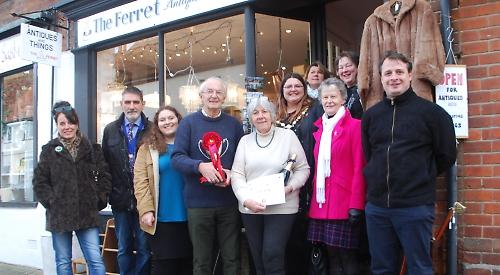 A NATIVITY scene featuring antiques from around the world has won the Henley Christmas front window display competition.

The display at antiques shop The Ferret in Friday Street was designed by owners Roger and Delia Etherington.

Seventeen businesses entered this year’s competition, which had a theme of “Christmas around the world”. Each display had to feature a globe and showcase the entrant’s trade or profession.

Mr and Mrs Etherington chose items for sale in their shop to create their traditional nativity scene featuring animal figurines.

The couple, who have run the business for more than 20 years, came second in the regatta window display competition last year.

“It was one better this time,” said Mrs Etherington. “We chose to tell the story of the nativity with items from across the globe as it seemed the right thing to do.”

The couple were presented with a trophy, certificate and bottle of champagne donated by Brakspear by a judging panel that included Mayor Kellie Hinton, representatives from the sponsors and Amelia Staines, who designed last year’s winning display at the Sue Ryder shop in Duke Street.

Cllr Hinton said: “The calibre of entrants this year was incredible, so the competition was really hard to judge. The educational displays were really good and the Regal Picturehouse let children make a display with recycled bottles.

“Entering these competitions is a great opportunity to get involved in the town and it really helps to brighten it up for visitors and residents.”

The runners-up, who won prizes of £100, £75 and £50 respectively, were VH & Co clothing and the new Thames Hospice charity shop, both in Duke Street, and Frost Borneo opticians in Hart Street.