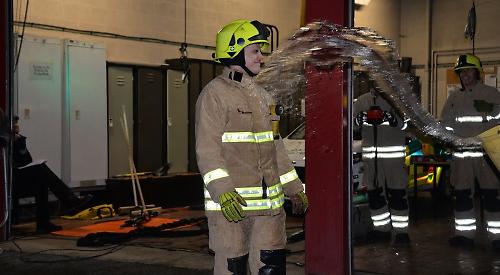 FIREFIGHTERS from Henley Fire Station showed their acting skills on the ninth night of the Henley Living Advent Calendar.

Nick Shuttleworth, Matt Prior, Jason Evans, Jack Staines, Michael Saunders and Ian Birch, all members of the crew at the station in West Street, took part in the performance.

It was called “Elf and Safety Visit” and began as they crew were introduced by Richard Rodway, organiser of the advent calendar.

Mr Evans, playing the “Elf and Safety Inspector”, arrived in front of the building and You Can Leave Your Hat On, by Tom Jones, began playing.

As the fire station doors opened four of the crew were dancing in the style of the Full Monty while wearing their uniforms.

Mr Evans stopped them so he could carry out his inspection to make sure the firefighters were ready for Christmas.

He said: “Whoa, whoa, whoa you can’t do that show tonight, that is for tomorrow night! Now you have finished fooling around, get on the squad line and parade.”

Nine volunteers were then called in to help from the audience of about 100 people, who laughed and cheered during the performance.

Mr Evans gave out pieces of paper with the letters for Christmas on them, which were revealed one by one.

He told how each letter corresponded with a piece of fire equipment and told the audience how it was used at Christmas time.

During some of these letters Mr Staines was soaked with water by his colleagues using the hose and buckets of water.

As “s” was revealed as the final letter, which stood for speedy getaway, the fire engine was turned on and the firefighters replaced their helmets with elves hats and jumped into the truck.

At the end, the word Christmas was revealed and Merry Christmas Everyone by Slade was played. Children were then allowed to look around the fire station and the fire engine.

Fortunately, the performance went off smoothly and the crew weren’t called to an emergency.

Mr Saunders, crew manager, said he had written the script himself. He explained Mr Staines was the newest recruit so was volunteered by the rest of the crew to get soaked.

He said: “It’s difficult to come up with a new idea every year. I’m happy with how it went and it felt like it was over fairly quickly.

“The event helps us let people know we are here. It’s part of our community service.”

Mr Rodway, a partner at event sponsors the Head Partnership, praised the performance.

He added: “It was everything we have come to expect from the fire station. What’s not to like about threatening to go into the Full Monty before switching into throwing water all over people.

“When you start doing things like that the kids are always going to love it. It gets the audience going in a panto-esque way.”

Last night’s performance was raising money for the Fish Volunteer Centre in Sonning Common and held in partnership with Tesco.

Friday night’s performance featured Highly Strung, a five-piece folk band, who were revealed as the act at The Bull on Bell Street.

The night was raising money for Headway Thames Valley, based in Greys Road, and was held in partnership with BNI Regatta. It raised more than £230 for the charity.

Tonight’s performance (Sunday) will be held in Falaise Square.