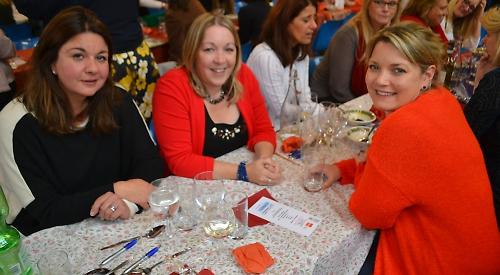 Dozens of women attended the event at the Christ Church Centre, which was organised by Henley Women of Inspiration.

They were served food and drink, including a meal by the Cook Curry Club, and were given a talk by Henley author Chili Brener, who wrote What The Queen Said To Me.

Several of the guests had stalls selling goods, including Meena Chhokar of Silk by Meena and Nicola Taylor of Lawlor’s the Bakers, who made gingerbread treats for everyone. Gelato Henley served a special sorbet.

The event was sponsored by estate agent Philip Booth who said: “I’m the only chap here but there’s method in my madness because it’s women who drive the housing market. They have been very gentle with me!”

Lindsay McLoughlin, who founded the group and organises the annual party with Kran Sondh, of the Cook Curry Club, said: “There are a lot of people who come every year and wouldn’t miss it. It works for people who want to network or just as a Christmas treat with your friends or mum.”