Pupils go back to Victorian era 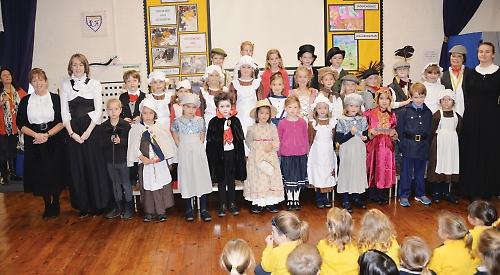 Pupils at Rupert House School in Henley performed a Christmas concert for parents and staff.

Youngsters from years three to six sang solos and duets, performed in small groups and choirs and played instruments at the concert on Thursday last week (23).

The school in Bell Street will be holding its carol service at St Mary’s Church in Hart Street from 2pm on Friday next week (8).

It also held a Victorian day last month where children dressed as pupils from the 1800s. They dressed in clothing from the era and took part in lessons including traditional British copperplate handwriting, arithmetic, drill (PE) and cross stitching.

The children also recreated Victorian photographs in their outfits.

Local community officer Davey Graham also spoke to pupils as part of the school’s road safety week. He talked about staying safe while crossing the road by using the Green Cross Code and tested the youngsters with different scenarios.

1711642: Pupils and staff from Rupert House School dressed as Victorians