Girl wins £200 for her school with Christmas card design 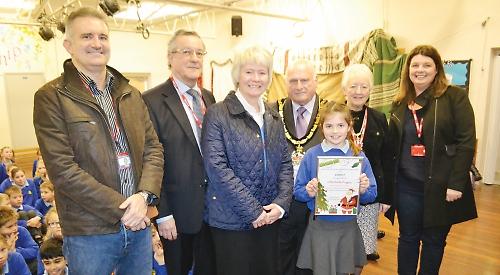 A CHRISTMAS card designed by an eight-year-old girl has won a Wargrave school £250.

Charlotte Pizzey, a pupil at Robert Piggott Junior School, was one of two runners-up in the Mayor of Wokingham’s Christmas card competition, which received more than 900 entries from children across the borough.

Her design featured a Christmas tree on a white background with red trim. Charlotte, who lives in Charvil with parents Mark and Rachel, was presented with a certificate at the school on Thursday last week by Mayor Rob Stanton and Alun Hicks, from Finchampstead, who donated the competition prizes in memory of his son David, an army captain who was killed in Afghanistan in 2007.

The competition theme was “Thankfulness for those who work over Christmas, including the armed forces”.

The entries were judged by Councillor Stanton and his wife Maureen and Mr Hicks and his wife Lesley. Cllr Stanton said: “Every year the Mayor has a Christmas card competition and we felt this year we wanted to do something different.

“Mr Hicks’s son was a very brave soldier who lost his life in battle. To celebrate his life we said, ‘why not ask schools to design a card?’

“We spent many hours judging and decided to have a winner and two runners-up. The standard of entries was terrific.”

Mr Hicks added: “We wanted to commemorate our son. This year he would have been 36 but it doesn’t seem too long ago that he was sitting like these boys and girls at an event like this.

“He enjoyed life and having fun. The money is for the school to do whatever it wants but we want the children to have fun with it.”

About 40 children from the school entered the competition.

Stuart Bevan, head of juniors at the school, said: “We are very proud of Charlotte and all the children that took part.”