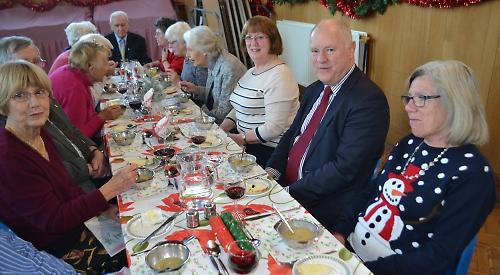 A FORMER army nurse awardded a military honour was among the guests at the Christmas lunch for members of the Henley and Peppard branch of the Royal British Legion.

Yvonne Lees, who was one of the first British veterans of the Second World War to be given the Légion d’Honneur last year, visited the event at the Christ Church Centre in Reading Road on Monday.

She was joined by more than 50 other guests for the lunch of soup made from vegetables harvested at the town’s Watermans allotments, roast turkey with all the trimmings and a flaming Christmas pudding made by chef Doug Richards.

Mrs Lees, 97, from Brundall in Norfolk, was visiting her son David and his wife Shirley, a former Poppy Appeal organiser, who live in Boathouse Reach, Henley.

During the war, she ran a nursing station and as the conflict neared its end followed the Allied troops east so she was one of the first nurses to arrive in Germany.

She continued her work in India and Egypt, where she met her husband Roy, who died in 2007.

During a ceremony marking the 70th anniversary of D-Day in 2014, the then French president Francois Hollande announced that the Légion d’Honneur, France’s highest military honour, would be awarded to all British veterans who fought for the liberation of France during the war.

Mr Lees applied on his mother’s behalf and she was awarded the honour almost two years later. A reception celebrating her achievement was held at Brundall Memorial Hall, with the medal presented by the mayor of its twin town Maurecourt.

Mrs Lees said: “I ran a casualty clearing station and we were the first group of nurses over after
D-Day following through to Normandy and Germany.

“When they had the commemorations, President Hollande announced he would offer the Légion d’Honneur to non-French nationals who played an important role in the campaign. I got a letter asking if I would like to be presented with it.”

Rev Martyn Griffiths, the rector of Henley with Remenham, was attending for the final time before his retirement and was presented with a certificate of appreciation for his work with the branch during his tenure. He thanked the group and said grace before the meal, while branch chairman John Green led the Ode of Remembrance. There was also a moment’s silence for Ursula Hughes, wife of Henley standard bearer Brian Hughes, who died earlier this month, aged 81.

Mr Green said: “This is an annual lunch which is very special this year for various reasons.

“It’s the last time Rev Martyn Griffiths will be joining us and we have a vote of thanks for him.

“Although there are some sad absences this year, the fact is that the branch is thriving and we now number 110 members.”