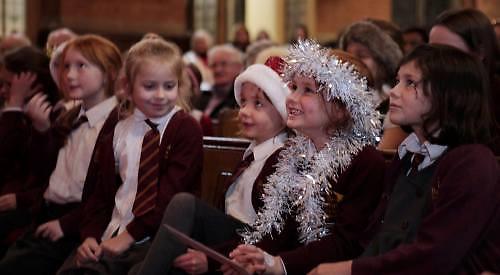 More than 100 people congregated at the Reading Road venue to see the surprise festive performance.

It began with a drum solo and was followed by a dance piece and some songs from the Suzuki Violin group, which included Carol of the Bells and a solo rendition  of The Snowman.

Pupils from Badgemore Primary School closed the show as they sang some traditional and contemporary festive classics including Hallelujah and ended with We Wish You A Merry Christmas.

Afterwards, the audience were treated to mince pies and other baked treats and mulled wine, courtesy of the hosts and sponsors for the night Manning UK Insurance.

The night raised more than £190 for the festival and calendar organiser Richard Rodway said: “You can see more than even tonight where your donations go – great to see such talented youngsters.”

He also urged people to support next year’s youth festival, which will take place in March, and will be in its 25th year.

Tonigh’s performance (Wednesday) will be held at Delegate House in Hart Street, in partnership with Canelle Beauty.

For a full round-up of the Living Advent Calendar so far, see this week’s Henley Standard, out on Friday.