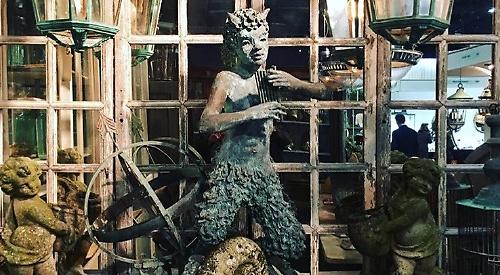 A STATUE of Greek god Pan given by Sir William McAlpine to his wife as a birthday present has been stolen from their home in Fawley Hill.

The 5ft lead statue, which is worth about £2,000, was taken between 4pm and midnight on Friday when Lady McAlpine was visiting 81-year-old Sir William in hospital, where he is recovering after an operation.

The statue was bought from Remenham antiques restorer Gary Wallis earlier this year and was on display at the couple’s Fawley Hill estate during the annual Salvo fair in June.

It depicts the god, a faun-like create with the body of a man and legs and horns of a goat, playing the pan pipes on a circular base.

She said: “It was the only thing of any value in the garden unless you count the animals and I wouldn’t advise trying to steal any of those as they would win!” Police are investigating, Anyone with information should call the non-emergency 101 number
and quote crime reference number 43170372877 or
call Crimestoppers on
0800 555 111.