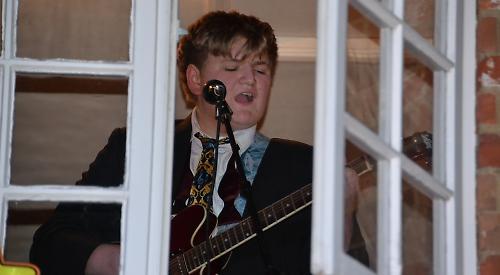 A MUSICIAN performed a collection of rock classics on the 20th night of the Henley Living Advent Calendar.

He played a 30-minute set that included House of the Rising Sun by The Animals, Knockin’ On Heaven’s Door by Bob Dylan, Wagon Wheel, Belle of Belfast City and Streets of London by Ralph McTell to a crowd of about 50 people.

He also played End of the Line by the Traveling Wilburys as a tribute to Roy Orbison, George Harrison and Tom Petty, Bad Moon Rising by Creedence Clearwater Revival, and I’m a Believer, originally by Neil Diamond, and made popular by The Monkees.

He finished with Johnny Cash’s Ring of Fire, followed by Jingle Bells, to which the crowd sang along before fake snow was blown into the audience.

The evening was raising money for Henley’s Regatta for the Disabled.

Chairman Mike Pooley said: “It’s our eighth year of the charity and we provide interactive activities for disabled people on the land and on the water and it’s growing every year.”

Richard Rodway, who chairs the calendar, said: “George was great. It was great to hear some songs like the Traveling Wilburys and Creedence Clearwater Revival, which is something a bit different. It’s good to hear the music I like!”

Tonight’s performance (Thursday) will be held at Hart and Bell Surgeries, off York Road.