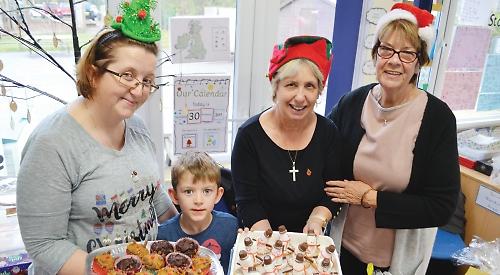 SANTA’S grotto and home-made cakes were among the attractions at Crazies Hill Primary School’s Christmas fair.

Dozens of pupils, parents and residents attended the event at the school on Saturday, December 2.

There were stalls selling food and drink including jams and chutneys made by Camilla Cook, of St Mary’s Church in Wargrave, while local businesses including the Horns pub, Gabriel Machin butchers and Hare Hatch Sheeplands garden centre sold turkey and Christmas trees.

The fair was raising money for a new £25,000 outdoor classroom at the school.

Emma Leatham, who chairs the parents’ association, said: “We had a great number of people from the school and also the community, which was so nice because we are trying to engage with locals with the fund-raising.

“The children ran the games room, which they did excellently and had good fun doing so.

“We also had a silent auction at the Horns pub which hopefully raised even more.”