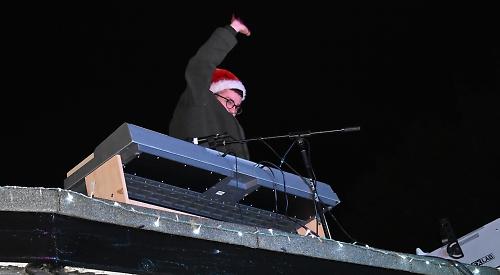 A SINGER-songwriter performed on the roof of the Hart Surgery on the 21st night of the Henley Living Advent Calendar.

Toby Marlow, 23, played a variety of Christmas songs and his own compositions on a keyboard, while guests crowded outside the surgery off York Road last night (Thursday).

Mr Marlow was introduced by calendar chairman Richard Rodway, with guests looking around for him as he began talking before noticing he was on the roof.

Mr Rodway said: “Christmas in Henley wouldn’t be Christmas without the Marlow!”

The evening was raising money for the Sue Ryder Nettlebed hospice.

Mr Rodway said: “I don’t need to tell any of you about Sue Ryder and I don’t think our insurance stretches far enough to get them up here!”

Mr Marlow’s 30-minute set included festive hits Have Yourself a Merry Little Christmas, made famous by Judy Garland, Joni Mitchell’s River, I’m Dreaming of a White Christmas by Bing Crosby and a medley of Jingle Bells and Rudolph the Red Nosed Reindeer, while he encouraged the audience to join in with the final number.

He also played his own songs I’ll See You Again, which he said he had only finished writing that day, Overnight, written for his friend Olivia, and Heart of Stone, from the musical Six which he co-wrote over the summer and is now being performed on the West End.

Mulled wine and sweets were handed out by staff at the Bell and Hart surgeries, while mince pies were provided by the Chocolate Cafe in Thames Side.

A fake snow machine also blew out snowflakes on to the crowd during the performance.

Tonight’s performance (Friday) will be held at Henley Town Hall in Market Place.