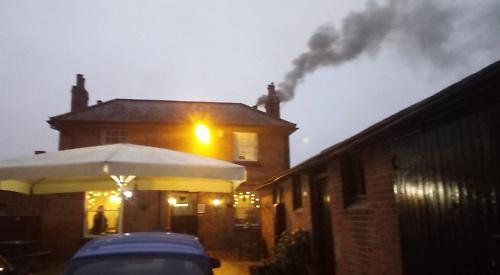 THE landlords of a Henley pub have thanked firefighters for tackling a chimney fire by offering them a free pint each.

Colin and Mel Roberson had just opened the Saracen’s Head in Greys Road for business on Wednesday last week when several neighbours called to say 8ft flames were shooting out of the chimney.

Firefighters were called as a large plume of black smoke could be seen over the pub.

The crews took more than four hours to get the fire under control as it could not be extinguished from either the top or bottom of the chimney. Instead, a specialist hydraulic platform had to be brought in from Reading.

Mrs Roberson, 52, who has run the Brakspear pub with her husband for 20 years, said: “We had opened as normal and lit the fireplace, then at about 3.30pm the phones lit up with people saying there were flames coming out of the chimney.

“We wouldn’t have known anything from inside but outside there were massive flames which later turned into thick black smoke.

“The fire brigade came straight out and were absolutely brilliant. They couldn’t get the fire under control and needed a hydraulic platform to put water on it from both the top and the bottom. It was quite eventful. They had to close Greys Road.

“The firefighters were amazing. They didn’t leave until 9pm and then came back again at midnight to check on it.”

There was no lasting damage to the pub, which opened for business again the following day.

Mrs Roberson said: “The offers of help we had were incredible. The phone didn’t stop ringing on the Thursday with people asking if we needed anything or if they could do anything. It was really nice.” As a thank-you to the firefighters, Brakspear is offering a free pint to any local firefighter who drops into the pub. A barrel of Brakspear’s Oh Be Joyful seasonal ale has been put behind the bar especially for them.

Mr Roberson said: “The fire brigade were real heroes. It wasn’t an easy fire to deal with but they were incredibly efficient, thorough and dedicated. They definitely earned themselves a free pint or more.

“We’re also really grateful to people locally who have come to us with offers of help — we’ve been really touched by their kindness. We will forever be grateful to them.”