Fitness fan says he's proud to be made town sergeant 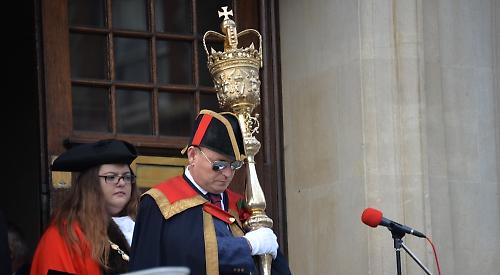 THE former personal trainer for a government minister has become Henley’s town sergeant.

Jason Acock, 48, has taken over from from Cliff Austin, who retired in September after 17 years.

He performed his first ceremonial duties at the Remembrance Sunday service outside the town hall on November 12, shortly after he was appointed.

He led the procession of dignitaries while carrying the town’s mace.

Mr Acock lives in Henley with his wife Julie, a commercial property lawyer, and their two children, George, 10, and Sophie, nine.

The family moved to the town about five years ago from Bristol when Mrs Acock got a job in Oxford.

Mr Acock spent the first 36 years of his life in Devon, growing up in Totnes and Ivybridge.

He spent most of his working life at Princess Yacht International, based in Plymouth, where he was a business improvement manager.

After he met his wife, the couple moved to Bristol, where he completed a course in nutrition and personal training.

He then became a personal trainer and among his clients was Liam Fox, Secretary of State for International Trade and MP for Nailsea in North Somerset. Mr Acock said: “I worked with him for a few years. Liam was great and he gave me a character reference when I moved and got a new job.”

That job was as head of the road cycling department at A W Cycles in Henley Road, Caversham, where he spent three years and was involved with the annual On Your Bike event in Sonning Common, which the shop sponsors.

He would go into the village primary school with business owner Rob Bowen and talk to the children about the event and the benefits of cycling.

One of his favourite pastimes is cycling and he has competed in several events including the Bath 100 and the Bristol to London Bike Ride. Mr Acock said: “I’m a keen cyclist and have raised money for Action Medical Research, which helps children and babies that have difficulties and diseases. My other favourite pastime is fly fishing.”

Earlier this year, he went to work at the Wormsley Estate in Stokenchurch as part of the security team.

He decided to apply to Henley Town Council for the role as town sergeant as he thought it would suit him.

Mr Acock said: “I’m going to take the qualifications and skills I have from the various things I’ve done and apply them to this.

“My job at A W Cycles was more of a selling role but you have to be able to talk to people and work with them and provide the right products for the right person.

“I’m a Henley person and I wanted to be involved with the community and that’s what this job is all about.”

He said one of the main things that attracted him to the role was being responsible for the council’s buildings, including the town hall, King’s Arms Barn and the Old Fire Station Gallery in Upper Market Place.

Mr Acock said: “The town hall belongs to the people of the town, so I’ll make sure it’s up to the standard and take care of it.

“I’m also hoping to introduce some new processes that will help save the council time and money.”

One of his first jobs is to repair the hole outside the offices of Citizens Advice in Market Place, which the council owns.

Mr Acock said the council and its properties were an important part of Henley and its status as an historic market town.

“We live and work in a great town and I wanted to give something back,” he said.

“The dressing-up for events is part of the responsibility of the job and is part of a tradition going back many years. It’s good to keep that going as a market town, even as we move further into the 21st century.”

Mr Austin, 64, of Deanfield Avenue, Henley, joined the council as caretaker in 1998 after spending much of his working life at sea.

After 18 months, he was made town sergeant, taking over from Stan Cox.