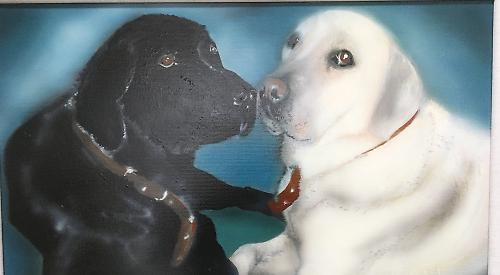 ARTIST Clive Hemsley has painted almost 1,000 portraits of Henley’s dogs — and he wants you to get him the rest of the way there.

He began in 2006 when he painted his two Labradors, Humphrey and Kipling, and since then has painted another 956.

Clive, who lives in Hart Street, Henley, has been keen on art since he was young and paints only as a hobby as he also runs his own advertising agency.

He used to paint mainly people but began to focus on animals after an incident with a fellow dog owner in Mill Meadows.

He recalls: “I was walking Humphrey when a lady gave him food and got nipped. I said that as compensation I would draw her dog, a poodle-cross.”

The woman was so impressed with his work that she wrote to the Henley Standard, which then commissioned him to paint six free dog portraits as a reader offer.

Clive then agreed to paint all 78 entries and the same number again when the offer was repeated the following year.

The rest of the paintings have been either for friends or charities.

In 2016, Clive offered to paint portraits of dogs belonging to people visiting the Helen and Douglas House shop in Henley in return for a donation to the charity. Fifteen people took up the offer.

He has also offered paintings as prizes in the Henley Standard’s annual Top Dog competition.

In August, he painted his 800th dog portrait of an eight-year-old retriever called Riley, owned by Steve and Sue Riley, from High Wycombe.

“Each one used to take me two or three days but now I’ve got it down to one day. I can do a session of six to eight hours but when I get into it I might sit down from 10am to 10pm.

“I’ve still got the original painting of my two dogs — it’s a totally different style to what I do now.”

Clive currently works in a studio at home but is having a new one built in Rotherfield Greys this year.

He says: “I like my studio — it’s my little domain — but at the new studio I’ll be able to do bigger canvases. I would love to paint a horse if someone can bring one along.”

Clive says the appeal of having a portrait is that is a reminder of a pet after it has gone.

He explains: “I didn’t paint our Humphrey again and he died in summer 2016 and I just can’t find it in me to paint our gorgeous black lab.

“I’ve got plenty of pictures of Humphrey but haven’t painted him because it’s too upsetting. You’ve got to paint them in their prime when they are at least eight years old.

“The trouble is I believe all dogs have souls and I find it very upsetting painting a dog after he’s died.

“Losing an animal is worse than losing a parent in my view — it’s a terrible bereavement.”

To reach his milestone, Clive is appealing for help from dog owners to send him photos of their pets for him to paint. He would like action shots and will choose three to paint.

He is then planning to hang up his paintbrush. “I think I’ve done my bit now, certainly for charity,” he says. “I’ll call it a day.”

To send him an action photo of your dog, email clive.hemsley@
livedesigns.co