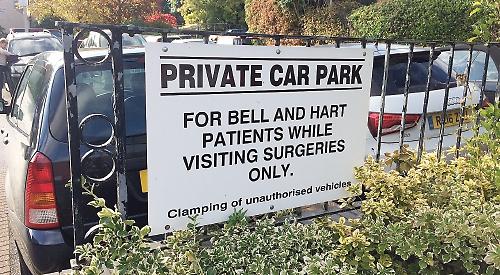 PATIENTS at the doctors’ surgeries in Henley are being threatened by bailiffs over unpaid parking fines which should have been cancelled.

They have received letters from debt collectors demanding payments of up to £190 for tickets issued at the car park for the Bell and Hart Surgeries, off York Road.

Some have even been threatened with court action and others have been warned that their credit rating could be affected if they do not pay.

The surgeries told the patients they would arrange for the fines issued by Smart Parking to be scrapped but now say they are being ignored by the company after cancelling its contract in November following repeated complaints.

The parking enforcement firm was employed to monitor the car park in a bid to stop it being abused by shoppers and visitors. The system required those visiting the surgeries for an appointment to enter their vehicle’s registration number at a touchscreen in reception in order to obtain up to 90 minutes free of charge.

Drivers were also told there was a 15-minute “grace” period for dropping off and picking up patients.

Smart Parking monitored the site using automatic number plate cameras sent anyone who failed to register, or registered incorrectly, a £60 penalty notice which increased to £100 if it was not paid within two weeks.

The GPs were able to ask for fines they felt they had been issued unfairly to be cancelled but since the contract ended Smart Parking has not replied to any correspondence, including a letter to the company’s chief executive Paul Gillespie.

Among those affected are Fiona Webbers, of Mount View, Henley, who was fined after she rushed her son Romeo to an emergency appointment the day before Smart Parking’s contract ended.

She says she had to carry the six-year-old from her car to the surgery and was too worried to think about registering.

Mrs Webbers, 37, said: “I was running across the car park holding him. I didn’t even think twice, I didn’t see any signs up and it was after hours.

“Romeo couldn’t walk, it was that bad. I was only in there for about 20 minutes.

“I got a fine in the post a week later and rang the doctors, who said they would sort it out. I assumed it had been cancelled until I got a bailiff’s letter which said I now owed £190. The doctors have told me not to pay it but I find it quite worrying to be ignoring an official letter.

“They got the company in because people were not using the car park for appointments but this is just a joke.

“I don’t park on double yellow lines or break the law and now I’ve got a bailiff’s letter. It’s scary.”

Joyce Hynd, from Middle Assendon, parked at the surgeries two days before the contract ended and received a fine in the post the following weekend.

She ignored it and then received a letter from bailiffs shortly before Christmas, telling her she would be taken to court if she didn’t pay.

“I’ve written to Smart Parking and the debt collectors. It’s quite upsetting when you get these letters, especially threatening ones.”

Silke Madzar, of Peppard, was fined after visiting the Bell Surgery on November 10 to fill in a form.

She didn’t believe she would need to register her car as she didn’t have an appointment but later checked with a receptionist who told her she had left within the grace period.

Mrs Madzar, 50, said: “I queried it and they said I hadn’t been there long enough so I just went home. A week later I received the letter from Smart Parking so I went back to the surgery, where they told me not to pay it and that they would deal with it.”

Mrs Madzar received a bailiff’s letter demanding £150 but was again told by the surgery that it would deal with it, meaning she missed the 28-day deadline to appeal.

She said: “We haven’t paid but now it could affect our credit rating, which is worrying. In hindsight I should have taken it into my own hands but the surgery kept assuring me and I trusted them.

“I hope it will be sorted because I’m not paying. We were within our rights. I can imagine older people who don’t have the stamina would be very worried by a letter from the bailiffs.”

Peter Colman, from Hambleden, was fined after taking a 99-year-old woman friend to an appointment at the Bell Surgery in November. He parked in a disabled space and displayed her blue badge before entering his details at the reception.

Mr Colman, 73, was told by the surgery that it would have the fine cancelled but later received a letter from bailiffs requesting a payment of £160 and threatening him with court action if he didn’t comply. He has appealed.

He said: “It could well be that I registered my name rather than the person who had the appointment at the surgery but they said that would be okay. We were in for less than an hour.

“I refuse to pay it, they can take me to court if they like. It makes no sense. It’s verging on harassment and the worry for some people is that it can affect your credit rating.”

Catherine Grant, from Bourne End, was sent a letter by a debt collection agency in November after being fined for waiting in the car park for about 10 minutes while her daughter picked up a prescription.

Her husband Roger said the fine was wrong because they had not overstayed the 15-minute grace period.

He said: “The surgery said they would sort it out and accepted it wasn’t fair. The first thing we heard back was when we received a bailiff’s letter saying they were coming to collect the debt, which has now gone up to £160.

“The time she was there and the fact that she didn’t even get out of the car means she shouldn’t have got a ticket. This happened to God knows how many other people and the Hart and Bell surgeries are at their wits’ end.

“They have so many cases of people with tickets and those people are now getting letter from debt collectors. Some are pensioners who must be traumatised by it.”

Mr Grant was also issued with a ticket at the car park for the neighbouring Townlands Memorial Hopsital, which is also monitored by Smart Parking, but this was resolved.

He said: “I took my lad in after he broke his leg on the rugby field and when we went in the receptionist helped me key my number in at the reception. I still got a ticket as the database clearly isn’t processed properly. In the end Townlands resolved it.

“The enforcement company are clearly trying to maximise revenues in the closing days of their contract.”

Louise West, practice manager at the Bell Surgery, said: “The cameras went on November 16 and every email I sent until that date saying that a fine was incorrect would lead to it being cancelled by Smart Parking.

“Since then we’ve not heard anything, other than to say a fine would not be cancelled. I asked ‘what’s changed?’ as it says in the contract that we have the right to request cancellations.

“I’ve sent a recorded delivery letter to the chief executive, emailed and telephoned and they won’t speak to us. I’ve emailed everyone from Smart Parking we have emails for, which is six or seven people, but nobody has responded.”

Mrs West said dozens of patients have been in touch with her to say they had received letters from bailiffs demanding payment despite assuming the fines had been cancelled.

She said: “I have a spreadsheet of all the patients and the Hart Surgery has done the same. I’ve contacted all of them and I’m chasing Smart Parking. The problem is that the tickets are issued by Smart Parking and we are a third party. We did tell the patients to leave it with us and that we would support them and ask for fines to be cancelled.

“I’ve spent three days since New Year contacting patients to update them on what we are doing and advising them to make their own personal appeals to POPLA, which is the independent appeals service.

“It’s really frustrating and we really feel for the patients because some of the money being asked for is not insignificant. As time goes by those fines go up, which is of a real concern to those affected. Some of them have been on the phone to me in tears. We are doing what we can to support them.”