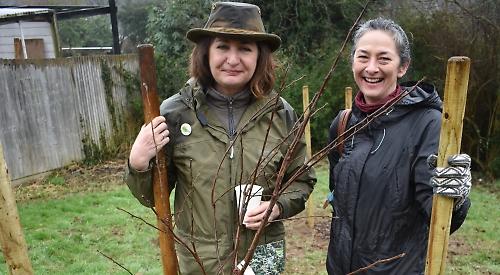 RESIDENTS helped plant more than 30 fruit trees at a community orchard in Henley on Saturday.

The trees, including apple, cherry, pear and plum varieties, will grow on a parcel of land off Paradise Road which is owned by the town council.

Despite the wet weather, which made the ground muddy and slippery, dozens of locals turned up to help councillors and members of the council’s parks services staff.

The volunteers included people living nearby, students at the neighbouring Henley College, members of the Chelsea Fringe Henley gardening festival, which helped organise the project, and children from Rupert House School and Badgemore Primary School.

They dug holes for the trees before planting them and put in wooden posts to support the saplings as they grow.

An edible hedge of blackberries and raspberries was planted at the edge of the site at the suggestion of Marcus Militello, the council’s parks conservation warden.

The volunteers were offered water and biscuits donated by Tesco and coffee from Starbucks.

Victoria Newton, co-organiser of Chelsea Fringe Henley, said: “The turnout was outstanding. It was not a very pleasant morning, so we couldn’t believe that at the peak there were more than 40 people of all ages, including three generations of one family.

“The idea is the orchard is owned by the council but we would like some of the residents who turned out to take care of the area. The more people who are out there tending to the trees or weeding the more it will encourage others to join in.”

The trees were supplied at cost by Toad Hall garden centre. The first one, a 6ft apple tree, had been planted by Mayor Kellie Hinton in November for National Tree Week. Vines donated by Jan Mirkowski of Fairmile Vineyard will be planted in May.

The Mayor, who planted a morello cherry tree on Saturday, said: “It was great to see so many people get involved.

“We want it to be an ongoing community project where everyone comes together, not just to enjoy the orchard but to maintain it too.

“We have chosen quite mature trees in the hope that people will be able to start enjoying the orchard as soon as possible. It’s also a good opportunity for the college students to get involved.”