Do a good turn to make us all happy 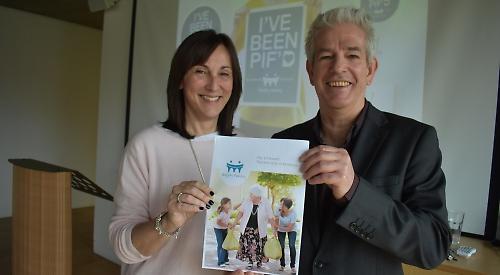 A “HAPPY Henley” campaign is to take place in the spring.

Residents will be asked to perform random acts of kindness for each other, such as carrying shopping, sharing an umbrella if it’s raining or walking a dog, and hopefully create a ripple effect.

This will be part of Pay it Forward Day on April 27, part of a worldwide movement that was introduced in Britain eight years ago.

Last year, people in 80 countries took part and it is hoped to achieve more than 10 million acts of kindness this year.

Henley’s involvement is being organised by Suzanne Morley, who lives in Market Place, and Geoff Hocking, managing director of marketing consultancy Breathe Creative, which is based in Station Road. It comes as the town manager is planning a new campaign to celebrate residents who take pride in Henley and the launch last week of the new Henley Heroes awards, supported by the Henley Standard.

Individuals, schools, and all business can take part in Happy Henley and Pay it Forward “ambassadors” will invite people to get involved.

Acts of kindness could range from opening a door for someone or making them laugh to cooking someone dinner or visiting a lonely elderly person.

You could also buy a tea or coffee for the person in the queue behind you or an extra cinema ticket and ask the server to randomly give it to someone else.

Organisers say the initiative will bring people together through a shared interest of kindness and gratitude, generating community cohesion and creating moments of positive interaction with strangers, family members, work colleagues and acquaintances.

Mrs Morley, a former lawyer who now works as a positive psychology consultant, moved to Henley in 2016 from Bermuda, where she first experienced Pay it Forward. She explained: “I was in the supermarket one day and this little prep school girl approached me and said, ‘we’re performing a random act of kindness and in return we hope you would volunteer to perform an act of kindness for somebody else’.

“I received a £10 coupon for my groceries that day. I was really touched by that and it meant a lot to me.

“I bought a bunch of flowers and gave them to the lady on the checkout the following week and she burst into tears. It really does give you that warm, fuzzy feeling inside. Geoff and I thought , ‘wouldn’t it be great to have a Pay it Forward day in Henley’. I’ve been met with so much kindness since I moved here and I really wanted to do something to pay it back.

“I like to think of it as passing the baton of kindness. It creates a ripple effect and that effect is felt by so many people. The beauty of Pay if Forward is you can do it anytime.

“It’s just a way of connecting with other people in the community. Most importantly, it will create community cohesion.”

Mr Hocking said: “We were talking about acts of kindness and about the Pay it Forward idea and thought ‘wouldn’t it be great to have a local Pay it Forward day?’

“We have created the branding for it and we’re going to help out with the publicity and promotion.

“I don’t think there's anything particularly wanting in Henley but what this does is build greater wellbeing in the community and it should be a bit of fun making time for one another.

“Life moves at a very fast pace these days and sometimes people can forget to perhaps open the door for somebody or to give them a hand — we all need help at some stage of our lives.”

She said: “Our focus will be on the positive benefits of recognising the importance of building better hearts and minds in our community.

“Happy Henley will lead the way as a town that has embraced the positive movement of developing a flourishing community because community wellbeing matters.”

Happy Henley will produce Pay it Forward stickers, posters and cards that people who take part can pass on to one another.

If you would like to volunteer as an ambassador, email Mrs Morley at suzannemorley@hotmail.com