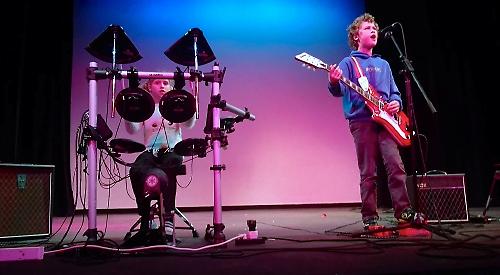 A BROTHER and sister won the first Henley’s Got Talent contest.

Felix, 10, and Didi Richardson, eight, played Waterloo Sunset, by The Kinks, followed by Seven Nation Army, by The White Stripes, to which the audience joined in.

The siblings, who live in Deanfield Avenue and attend Sacred Heart School in Greys Hill, and were one of 20 acts that performed at the Kenton Theatre in New Street on Saturday afternoon.

Their father Matt said: “Felix has performed as a solo act once before at the Kenton Theatre at last year's Henley Youth Festival Sing.

“Saturday's performance was Didi's first public performance. She was so nervous that at Friday's rehearsal she said she couldn't do it. We spoke to her that evening but on Saturday we weren't sure if she would go ahead until just before the performance.

“I'm so proud of her for doing it. We don't watch television, so neither Felix nor Didi are aware of the X Factor or Britain's Got Talent. They didn't know the show was a competition until the day. I told them not to worry about it and just do what we'd rehearsed.”

The show was organised by the Mayor of Henley Kellie Hinton, and was open to primary school pupils and older students.