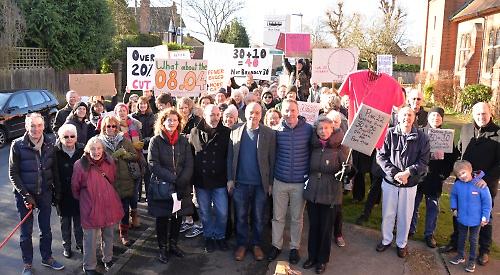 MORE than 50 campaigners staged a protest in Caversham Heights over cuts to a vital bus service.

Residents say that more than 20 per cent of the number 22 Reading Buses service will be axed from February 19.

The company is to combine the service between Caversham Heights and Reading town centre with the number 19 serving Lower Earley.

The new route, which will be rebranded “red 22” to avoid confusion with the “pink” services serving Caversham exclusively, will continue south beyond the Royal Berkshire Hospital to the Asda supermarket at Chalfont Way, Earley.

But campaigners are demanding a 30-minute peak time service and say the new timetable will involve reducing every bus during off-peak and weekends to once an hour, causing inconvenience for residents.

They have asked the company to keep the service at the same level as it is now to enable them to attract new passengers to the service, but to no avail.

Residents gathered on Sunday morning in Highmoor Road, on the route served by the 22, and were joined by their MP Matt Rodda.

Many had made placards which read 'hourly buses not enough’, ‘fewer buses means more cars’ and ‘we need our bus’.

Campaigner organiser Fiona Pringle told the Henley Standard: “They (Reading Buses) stated when they announced the severe cuts to the 22 that they wouldn't alter the 30-minute frequency of the peak service. They then went ahead and did exactly that – up until the last week there has been gaps of 48, 50, 65 minutes to the peak service.

“They have since plugged a few of the gaps following our questioning them on their integrity, however, they have not reinstated the peak service to 30 minutes. They have great gaps of 40 minutes between buses in key peak time – 7am, 7.40am, 8.20am. This means people will miss their links to onward train and bus journeys.

“Children as young as four will either have to arrive 30 minutes before their primary school opens or be late every day - not a great way to start a young child's education.”

Mrs Pringle added: “When Reading Buses started to announce the changes, I met with Martijn Gilbert, the chief executive of Reading Buses. He stated that it wasn't possible to slightly reduce frequency of some of the other routes by a minute or two in order to juggle the frequencies to enable the 22 to avoid such harsh cuts.

“He stated it is important to have a consistent frequency of either every 10, 15, 20, or 30 minutes past the hour to be able to attract and retain passengers to a service. It is questionable, therefore, his motives for such odd frequencies on the 22.

“We have shown them it is possible to provide a 30-minute frequency with the buses they have put on for the revised timetables, they refuse to consider them.

Residents spoke of their anger at the changes at Sunday’s protest.

Grace Proctor, of Clifton Park Road, said: “I suffer from epilepsy so I rely on the buses to get around. I will lose my independence if I don’t have a regular bus service because I rely on it to get to work, to my appointments and to see my fiance who lives on the other side of Reading.”

Leela Deshpande, of Albert Road, said she used the bus to get to jobs at Maiden Erlegh and Kendrick Schools, Reading College and Reading Crown Court.

“You will get there 20 minutes early, or 20 minutes late – it will make life very difficult,” she said.

Heather Baker, of Matlock Road, said: “I've been using the 22 service for 50 years. It’s awful because I use it regularly to get into Caversham, Reading and Whitley Wood.”

Stephen Roberts, of Woodford Close, said: “We need the bus, we’re passionate about the bus here. The campaign are doing an excellent job but we need to make more progress and we’re just convinced Reading Buses are not listening.

“This area has a lot of elderly people who need buses.”

Judith Sell, of Fernbrook Road, added: “I’m here today because of the community. I’ve got a car, I live near another bus stop, I’ve got family around but that’s not the point. It’s the community that’s suffering - it’s the young, the commuters  and the elderly as well. It’s disgraceful.”

Ray Noble, of Geoffreyson Road, said: “They are proposing one bus every hour – the proposals are disgraceful. This should be a public service and not a money maker.

His wife Sheila added: “I broke my leg in the summer and there’s no way I could walk to the doctors’ surgery in Caversham. We never use our car unless we have to.

“I’ve had numerous appointments at the Royal Berks, because of my leg in particular, and it’s just hopeless to drive.”

Councillor Isobel Ballsdon, a Conservative who represents the Mapledurham ward on Reading Borough Council, said: “The elderly are most affected because a lot of them don’t drive and they are reliant on the buses.

“Reading Buses hasn’t delivered on their promise of a half hourly service and they haven’t taken into consideration the age profile. They have failed to respond to questions on whether or not they have looked at the Equality Act.”

Reading East MP Matt Rodda added: “I’m supporting the campaign and I think buses are an important public service and they make a big difference to local people.

“We have both Labour and Conservative local councillors campaigning on this matter.

“The very severe cuts were to completely stop the 24 service and to take large chunks out of the 22. We have managed to prevent all of that but they are still proposing some cuts to the 22 but I would like to see this revisited as well.”

Mr Rodda said they needed to keep pressure on the company but also to continue growing bus usage in Reading.

He has spoken to Rachel Cave, the head of Highdown School in Emmer Green, and Microsoft, which is based at Thames Valley Park, about encouraging its employees to use the buses.

Mr Gilbert said: “Routes in Caversham have been losing money for the last few years and the company has had to look at changes to improve efficiency and reduce costs to keep the routes sustainable.

“We have worked hard to shape a plan which will achieve the best possible solution. We have found a way to operate the routes more efficiently, better matching current demand while introducing improvements we hope will prove popular.

“There are elements which we trust will motivate more people to use the buses, which is paramount if these services are to be sustainable into the future.

“We’re encouraged by the strength of feeling the local community has shown in response to our consultation.

“However, we must reiterate that it is one thing to respond to a consultation to keep the service running and quite another to maintain the service in the face of dwindling customer numbers.

“We encourage everyone who has written, tweeted, phoned and emailed to now get on board the buses so that they are well-used to ensure their long-term future.”