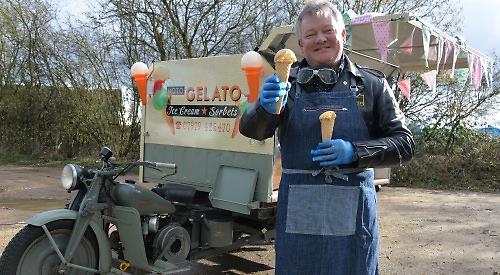 A MAN wants to sell ice creams and sorbets from a vintage Italian tricycle in Henley town centre.

Mike Rogers, of Moto Gelato, says his modified 1948 Moto Guzzi Ercole would be a talking point and attract visitors to the town.

He spent a year converting the three-wheeler, which he bought in Italy in 2016, and now wants the town council’s permission to operate from Market Place on two or three days a week.

Mr Rogers, 58, from Middle Assendon, said: “It’s fun, it’s attractive and it’s unique. It would be a talking point and and an attraction. People would say, ‘we went to Henley on Sunday and there was an amazing ice cream van in the centre of town’. This ice cream trike ticks all the boxes in Henley in making it a destination.

The ice cream is produced by Beechdean Ice Cream at North Dean, near Hugh Wycombe, and Mr Rogers hopes to sell six different flavours. He also runs Stovell’s Fish Suppers, selling fish and chips from a van in local villages including Shiplake and Nettlebed.

Mr Rogers said: “The idea of the fish and chip business is to provide a service in villages which haven’t got anything in the evening.

“I don’t make enough money from it to live off, so I bought the trike. I built it myself. I imported the trike from Italy and built a box body on the back of it with the help of a few mechanic friends.”

He first unveiled the tricycle at Henley Royal Regatta and was also at last year’s Thames Traditional Boat Festival where he said it was well received. He also attended the Christmas festival in December.

Mr Rogers said: “What I’m after is to make it a viable business in Market Place. It’s a genuine, well-meant attempt to add an attraction to Henley.”

His proposal will be discussed at the next meeting of the council’s town and community committee meeting on February 30.

Moto Guzzi began making the Ercole in 1936 as an agricultural truck and it was used throughout the Second World War by the Axis powers. The last model was produced in 1982.