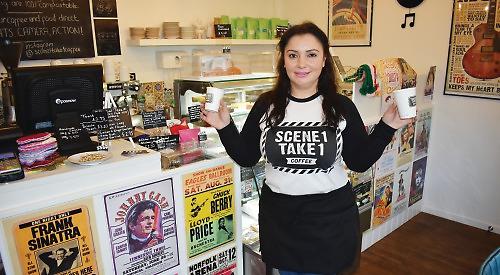 ONLY three out of 14 coffee shops and cafés in Henley offer fully recyclable takeaway cups.

Scene 1 Take 1 in Bell Street, Spoon in Duke Street and Leafi at the River & Rowing Museum are the only ones to sell cups made entirely from plant material and containing no plastic.

The other 11 use takeaway cups which contain a plastic polyethylene lining which can only be recycled at specialist plants, of which the UK has just three.

Harris + Hoole, which is due to open at the former

Maison Blanc unit, on the corner of Hart Street and Duke Street, later this month will use compostable cups.

The findings of a Henley Standard investigation come as the Government looks at options to reduce the amount of plastic waste produced by the hospitality sector, much of which ends up in the sea, killing wildlife.

A group of MPs has suggested a 25p “latte levy” for disposable cups sold by coffee shops and cafés as currently less than one per cent of the 2.5 billion cups thrown away each year are recycled.

It comes in the wake of the 5p additional charge for plastic bags, which the Government wants to extend to all shops.

Prime Minister Theresa May has called on supermarkets to devote entire aisles to plastic-free products with the aim of eliminating all avoidable plastics by 2042.

Several Henley coffee houses said they were planning to introduce compostable cups in the wake of the proposed 25p charge, while others already offer initiatives such as discounts for customers who bring in their own reusable containers.

Town manager Helen Barnett said: “The issue for retailers is profit margins versus the environment. Many may want to do something about recycling but have their hands tied financially or are part of a chain.

“We would love everyone to embrace the concept and help save the planet for our children. Henley is quite forward-thinking in that way.

“It’s about convenience and whether people are prepared to re-use cups. Many people now walk around with a water bottle so it shouldn’t be too hard to do the same with a coffee cup. It’s down to individuals as well as companies.”

Niki Schäfer, who chairs the Henley Business Partnership, said: “As a society, we need to be more responsible with plastic use.

“If our coffee shops are among the first to stand up and say ‘we are changing the way we do things’ we would be very pleased.

“In the same way, we want to get pubs to stop using plastic straws and stirrers.

“There also needs to be a shift in consumer behaviour. It’s not just about the businesses. We need to think about being a little bit more prepared and having reusable cups and bags on us when we go out.”

Environmental campaigner Julia Carey, who launched the Henley Refill scheme for reusable water bottles last year, said she felt many people would continue to use disposable cups even with an extra charge.

She said: “I’d like to see more of a push towards using refillable cups, so perhaps larger incentives for using these, but this is simply never going to happen for some people.” She would like to see more councils work with Simple Cups, a scheme which collects takeaway coffee cups and re-uses them.

Mrs Carey, of Reading Road, Henley, said: “Simply Cups is currently the only business that actually recycles the disposable cups with a polyethylene lining, turning them into cardboard and even furniture.”

Dave McEwen, who chairs Henley in Transition, said: “There is now much more awareness of the problems caused by plastic. Using a re-usable cup is one way that people can do something.”

Henley MP John Howell said: “I think people have to accept that we have to get rid of takeaway coffee cups and how we do that is something we want the shops to engage in.

“If I was running a coffee shop I would be talking to my customers about how we can do this together.

“The proposed charge is one issue but it doesn’t take away the need to stop using plastic and find alternative means of carrying coffee.

“Bringing in your own cup seems a very good approach and if that’s something shops want to encourage I will support them in that.”

• A free screening of the documentary Bag It: Is Your Life Too Plastic? will take place at the d:two centre in Market Place on Thursday, February 22 at 7pm. A free coffee will be provided for those who bring a refillable cup. To book a seat, email bagithenley@gmail.com